Advocacy for a new Himalayanism : Should the rules for expeditions to Nepal be changed? Part 1 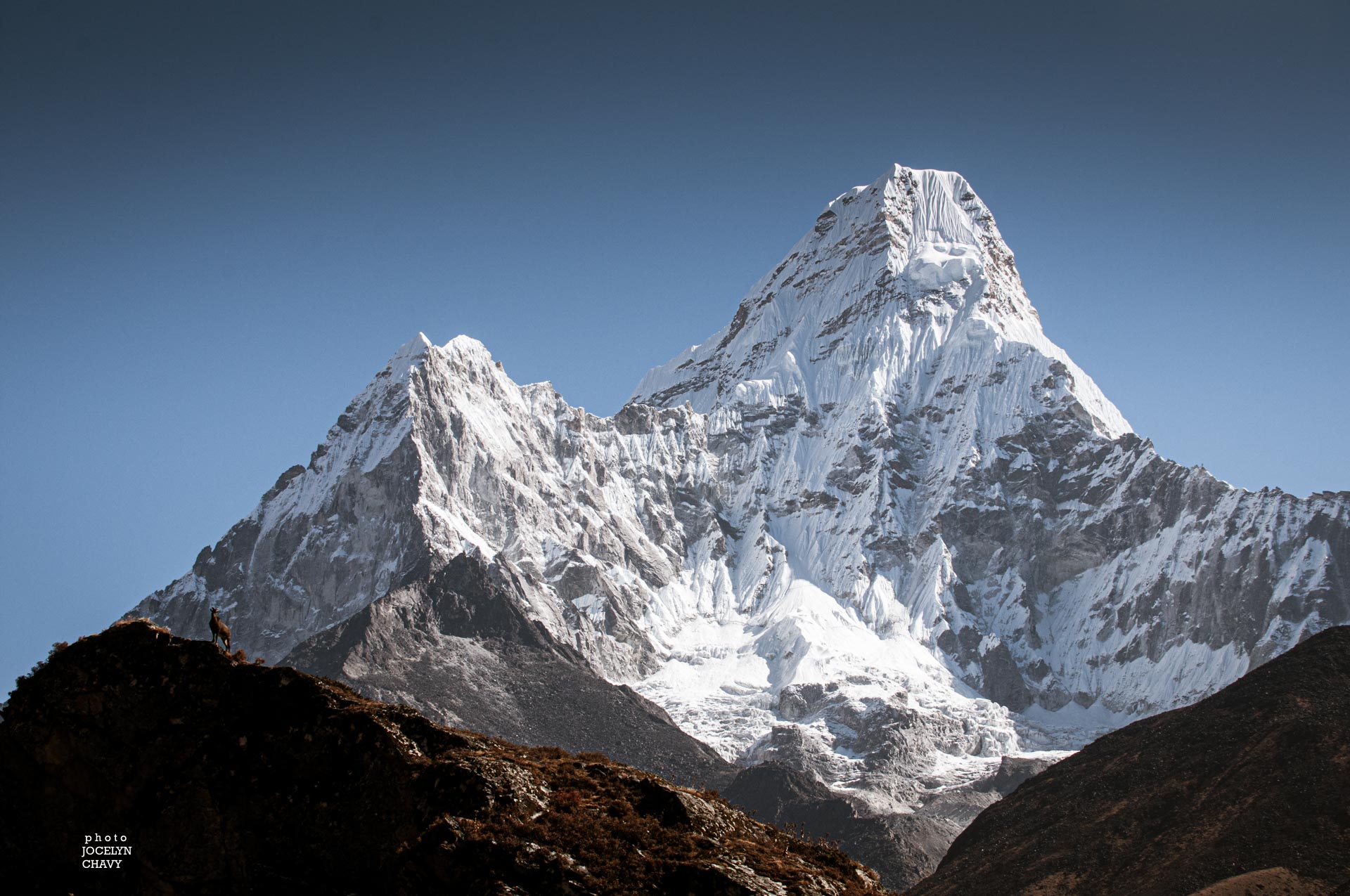 The queues of Everest candidates have made visible an unattractive aspect of the current Himalayas: too many fixed ropes and extreme merchandising have made the adventure at altitude bland, to the point of denying the existence and the interest of a real, roped-up practice of the mountain. Isn’t it time to think about a new amateur Himalayanism? Let’s change the rules of the game. Here are the proposals of Paulo Grobel, guide and specialist in light expeditions.

2020has been an exceptional year in the Himalayas and Nepal. Not because of the quality of the ascents but rather because of the almost total absence of any mountain climbing at all. This new situation could incite us to take a fresh look at our Himalayan ascensions – a way of imagining a different world in the Himalayas.

The reflection within UNESCO which led to the classification of mountaineering as an Intangible Cultural Patrimony of Humanity and Reinhold Messner’s Manifesto book invite us to analyse our current practices. Himalayanism itself has been shaken by the devastating effects of an extreme commodification that began on the highest peaks and has become more and more generalised.

Is it possible to change the rules ?

Isn’t it time to reflect on what it really means to reach the summit of a mountain? What needs to happen to make that experience rich and meaningful?
– Is it possible to change the rules of mountaineering in the Himalayas?
– Is it possible, for example, by limiting the use of fixed ropes on the summits, to give a deeper meaning to our climbs?

To do this, it is essential to discuss within the international mountaineering community, country by country, with the Himalayan Data Base and above all also within Nepal with the NMA , the guides of the NNMGA , the NMIA , the Mountaineering Section of the Nepalese Ministry of Touring (& civil aviation), as well as the Nepalese agencies specialised in organising expeditions.

The major part of this challenge will be to convince all these communities that a strategy to increase the complexity of expeditions will have beneficial repercussions on agencies’ profits and the interest of the work of Nepalese guides, all the while enhancing and perpetuating Himalayanism.

This reflection on the need for a change in the rules for expeditions can be illustrated by reading Bernard Amy’s latest book and particularly the chapter on “the psychological foundations of today’s mountaineering”. Bernard Amy refers to an article by Lito Tejada Flores originally published in the American magazine Ascent . 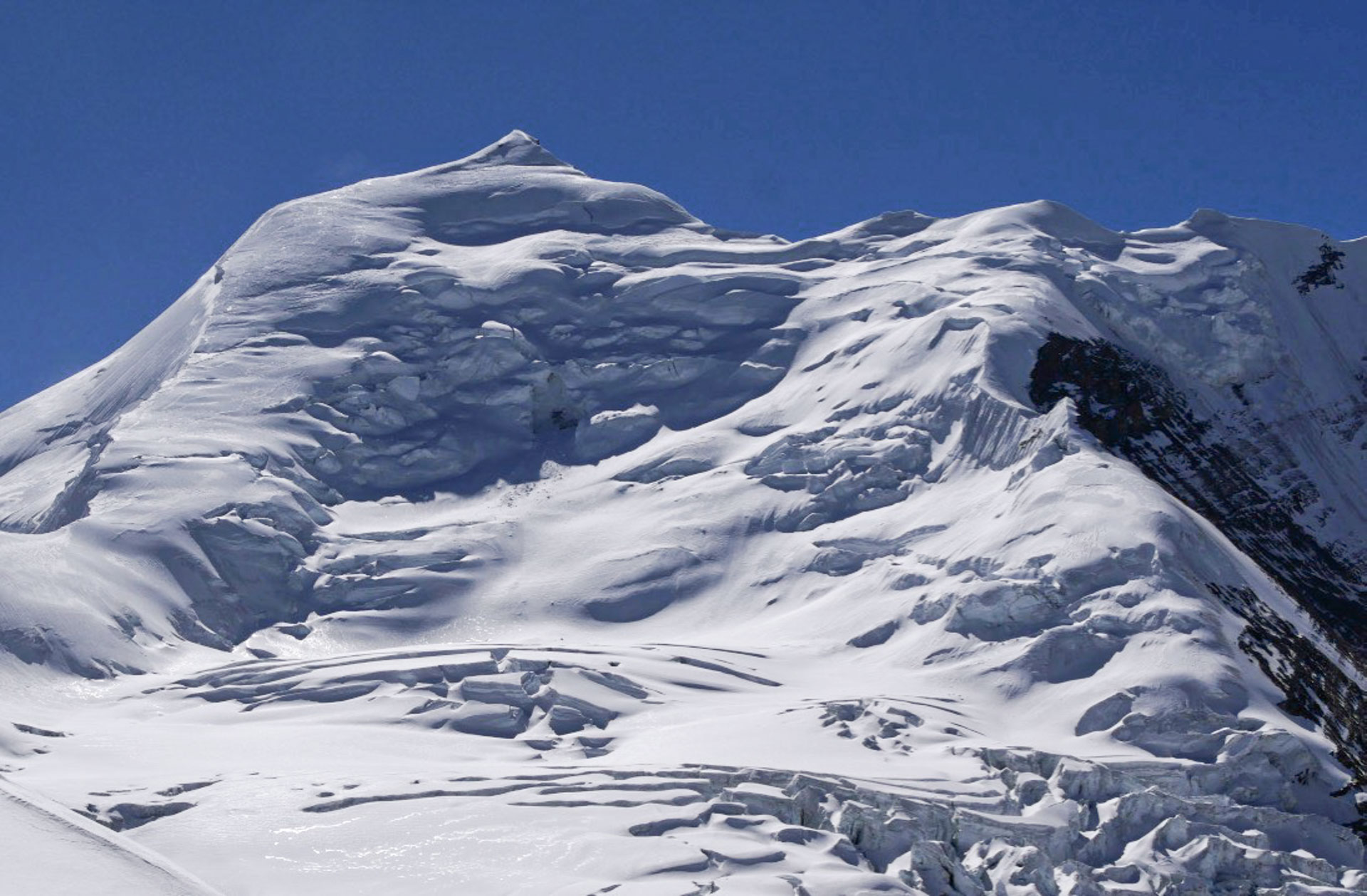 The Himlung, a beautiful 7000 north of the Annapurnas and a great goal for amateurs. Without fixed ropes, please! ©Paulo Grobel 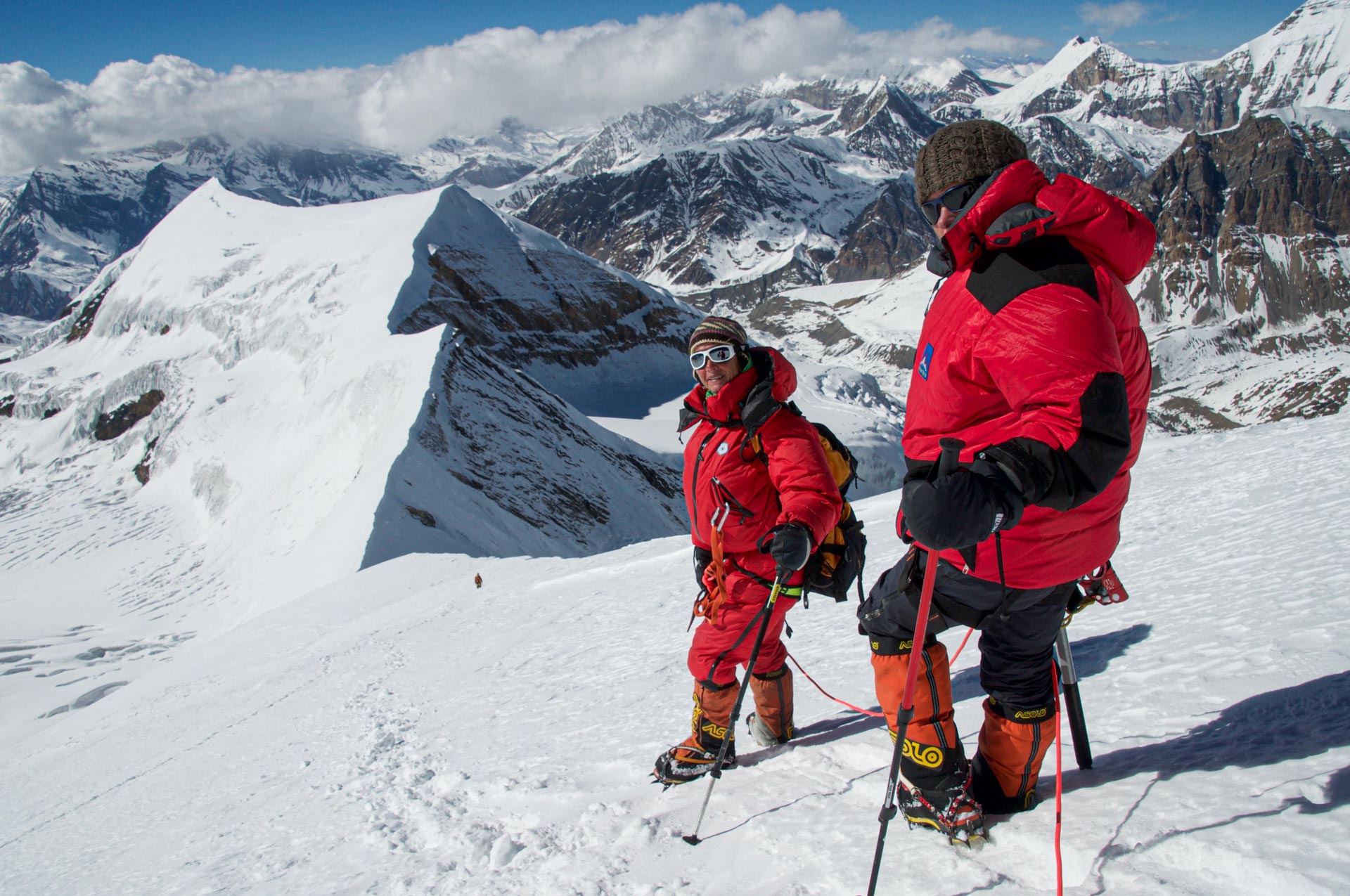 Roped, and without fixed ropes, high on the Himlung. ©Paulo Grobel

What does Lito Tejada Flores explain in his article? He explains that mountaineering is comprised of several very different types of “play”, each with different tools and different rules. At the top of the pyramid are the expeditions that have a minimum of conventions. Just below, we find “Grand Alpinism”, with much stricter conventions, and inevitably a more limited number of followers and achievements. And, the question is when, how, and by whom the rules of a specific type change or have to change.

“The classification of climbing that I propose is not an attempt to decree that some types are better, harder, or merit more than others. Its real purpose is to make the scale of values equivalent from one type to another so that the climber who plays one of these games can feel the same sense of accomplishment” … ” Games, as well as their rules, are subject to slow but constant change. The central problem of climbing ethics thus revolves around the question: who sets the rules of these games? And, secondly, how do they evolve over time? »

The central problem in climbing ethics actually revolves around the question: who makes the rules?

To conclude his article, he takes as an example the story of the Big Wall of Yosemite, his favourite terrain of play.

“It is the set of rules of the climbing game that changes continuously, in an ever more restrictive sense, that is to say by transcribing the rules of a game to the one higher up in the hierarchy, with the aim of preserving the fundamental confrontation sought by climbers.”

The first victim will be the game of expeditions, which may disappear completely in favour of the game of Super mountaineering. In a sense, this is indeed more creative, the obstacles encountered being so great that the evolution of technique or equipment is not likely to reduce its interest. This gradual shift in the rules of the climbing game opens up an immense field for climbers”.

It seems that Lito has not taken into account a major element in the evolution of Himalayanism: the economic stakes of the commodification of expeditions. At present, this hyper-commercialisation considerably reduces the Himalayan climbers’ game by normalising it through the rules of an ultra-competitive economic market, without concern for the meaning of mountaineering and its associated values.

The only possibility of a different evolution of mountaineering could be the modification of the rules of expeditions and above all that the majority of actors agree to concretely change these rules for all summits.

It should be noted that it is not possible to practice different types of mountaineering on the same ascent route. If fixed ropes are in place, it is Great Alpinism that loses its place and legitimacy, and unfortunately, very few teams remove the fixed ropes they have put in place after their ascent, which irremediably distorts the route for others who come later. Furthermore, global warming, through the decrease in snow cover, is further radicalising this reality. 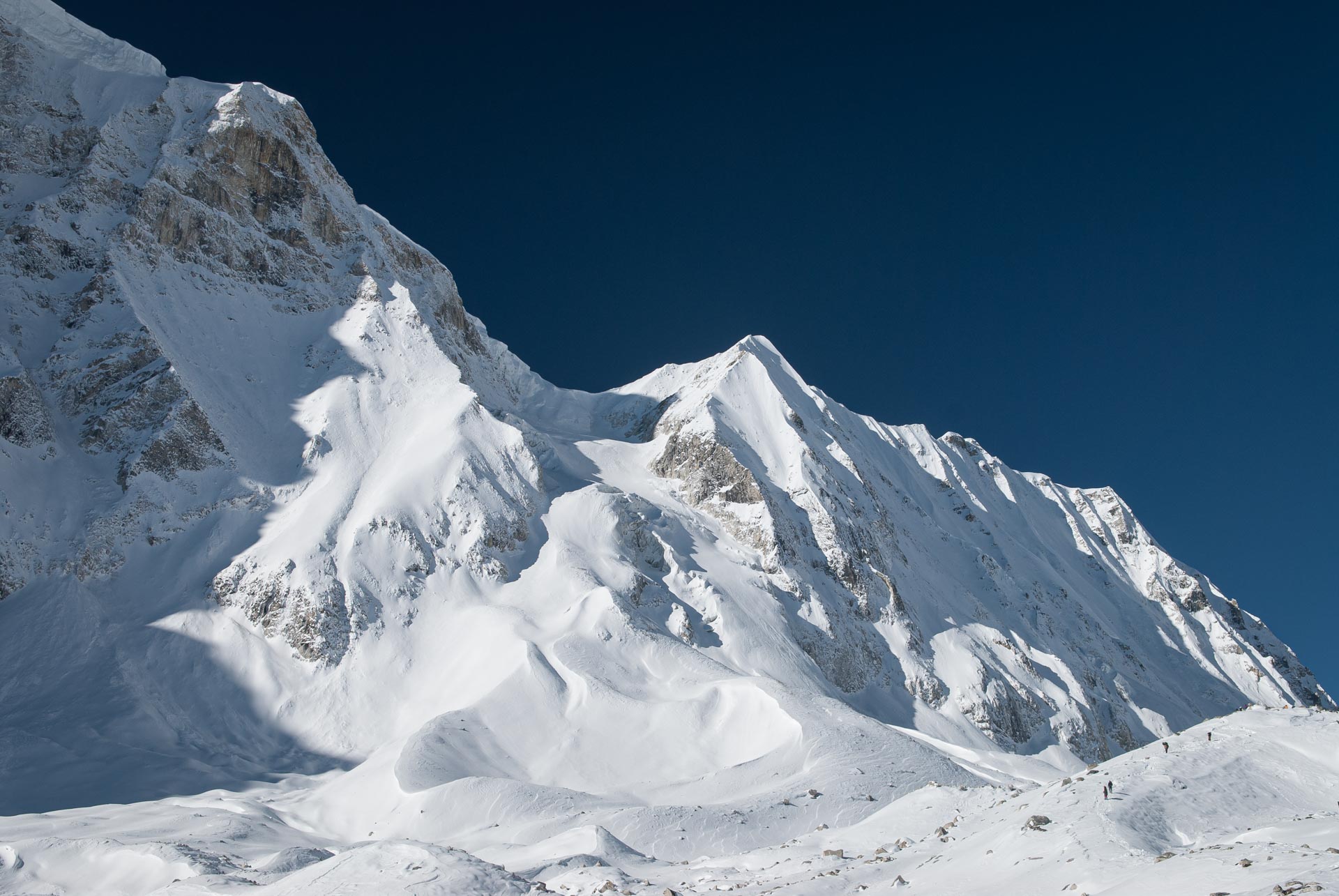 Near the Manaslu, the Larkya pass, the pass leading to the Larkya (Main on the left and Sano on the right), summits that must be tackled in alpine technique. ©Jocelyn Chavy

Ok to change the rules, but how ?

To avoid the problems linked with hyper-commercialization, the Himalayas should be given back their original character, the complexity of their ascent, and we should all decide together to stop using fixed ropes in certain places, depending on the summit (and for the busiest summits).

The emblematic summits, such as Everest, Lenin Peak, Mont Blanc, or Ama Dablam seem to belong to a different category of mountains that could be taken out of the game of mountaineering entirely. This is certainly the price to be paid to appease major conflicts of interest between the economic world and a sporting reflection of mountaineering. Everest, Ama Dablam, Himlung, and Island Peak by their normal routes could then become simple “Tourist Summits” outside the field of mountaineering and whose climbs would no longer be listed.

In the end, it is a question of finding a balance between the economic stakes of mountaineering in Nepal and the need to reinvent a game worthy of interest for real mountaineers. All the while respecting an exceptional natural and human environment.