They are snowboard instructors, climbing instructors, mountaineers and former members of the national mountaineering team. There are (at least) five of them. In recent weeks, they have been arrested by the Iranian political police after participating in pro-democracy demonstrations. They are now accused of “terrorist plotting”. The mountaineering community is mobilising to make known the support of mountaineers around the world for their Iranian colleagues.

A cloud has fallen over Iran since the pro-democracy protests in the country. Information from outside Iran is difficult to come by. The repression spares no one in civil society. In France, the UNESCO Alpinism Committee has received very worrying information concerning several Iranian climbers and mountaineers. It invites mountaineers and mountain lovers to mobilise to make their support known to their Iranian colleagues. Many sportsmen and women, including climbers, mountaineers and snowboarders, have been arrested in recent weeks in Iran for taking part in the demonstrations that have taken place in the country. Some of them are from Shiraz, from where these dramatic snippets of information have reached us.

Dena Sheibani, a snowboard teacher, was arrested on the 10th of November. She was in a taxi when she was apprehended by the security forces. Her family has not heard from her since.
Eshragh Najaf Abadi, a former member of the national cycling and mountaineering teams, was arrested on the 30th of October. His relatives did not know where he was being held, and feared that he was “under pressure” to confess.
Amir Arslan Mahdavi, a snowboarding teacher, climber and member of the national mountaineering team, was arrested on th 26th of October along Maali Abad Street in Shiraz, before being transferred to an unknown location.
On the 22nd of November, Mohammad Khived, a mountaineer, was arrested, just like Hessam Mousavi, a climbing instructor. Hamid Ghashghaei, a mountaineer, was arrested after writing “Freedom” in chalk on a nearby mountain. 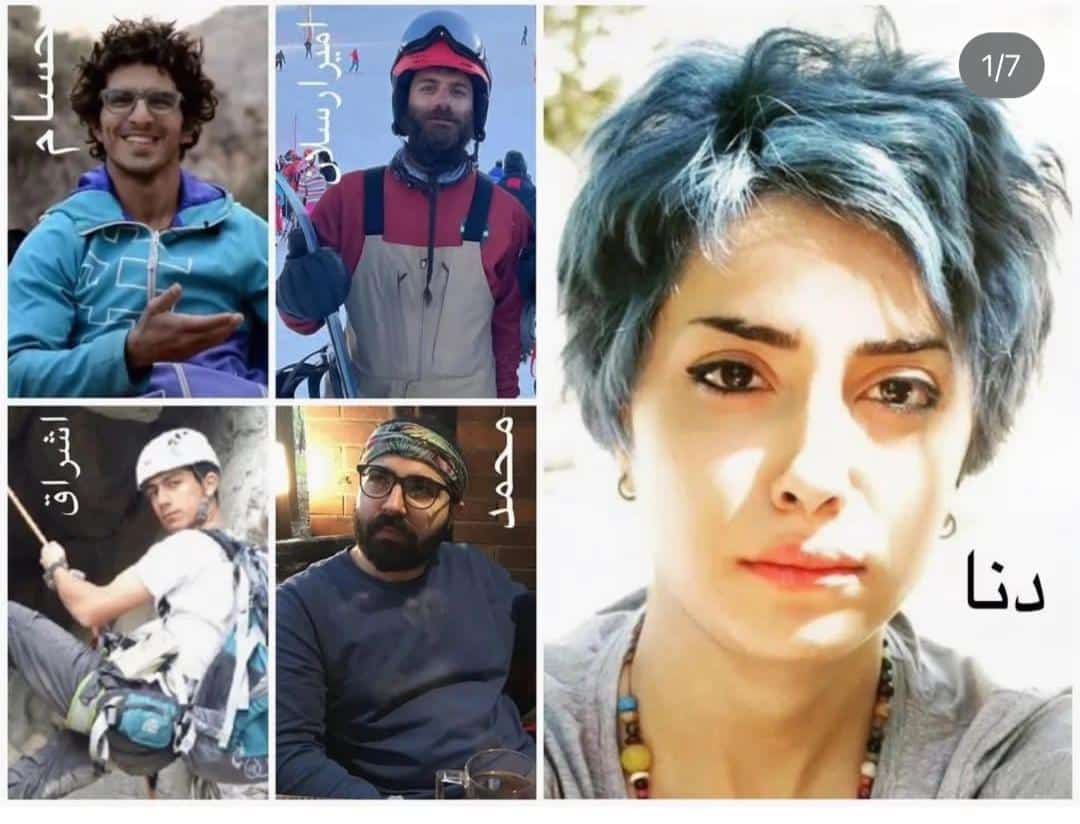 The mountaineering community has just received this sad news and is concerned about their fate.
We are aware that many other Iranians are in the same situation. We hope that shedding light on the fate of these men and women, our colleagues, can help others as well. Very soon, bad news arrived. Some of them are said to have admitted to working on a bomb. According to their relatives, these confessions were obtained “under pressure”. Others do not hesitate to use the word “torture”. “It’s a forced confession after torture. A thing that Islamic Republic always do when arresting them“, says one of our sources.

This confession makes them potential death row inmates. The website iranwire.com published this morning an argument dismantling the accusation.

We hope that shedding light on the fate of these men and women,
our colleagues, can help others as well.

It is up to the mountaineers of the world to mobilise. Mountain solidarity is a reality that knows no borders. This character was noted by UNESCO when mountaineering was included in the Intangible Cultural Heritage of Humanity in December 2019. Among the 178 countries that have ratified the text of the inscription is Iran.

The UNESCO Alpinism Committee FRANCE invites mountaineers to mobilise to make their support known to their Iranian colleagues.

A petition is online, on change.org. At the time of writing, it has 7900 signatures. Many more are needed!