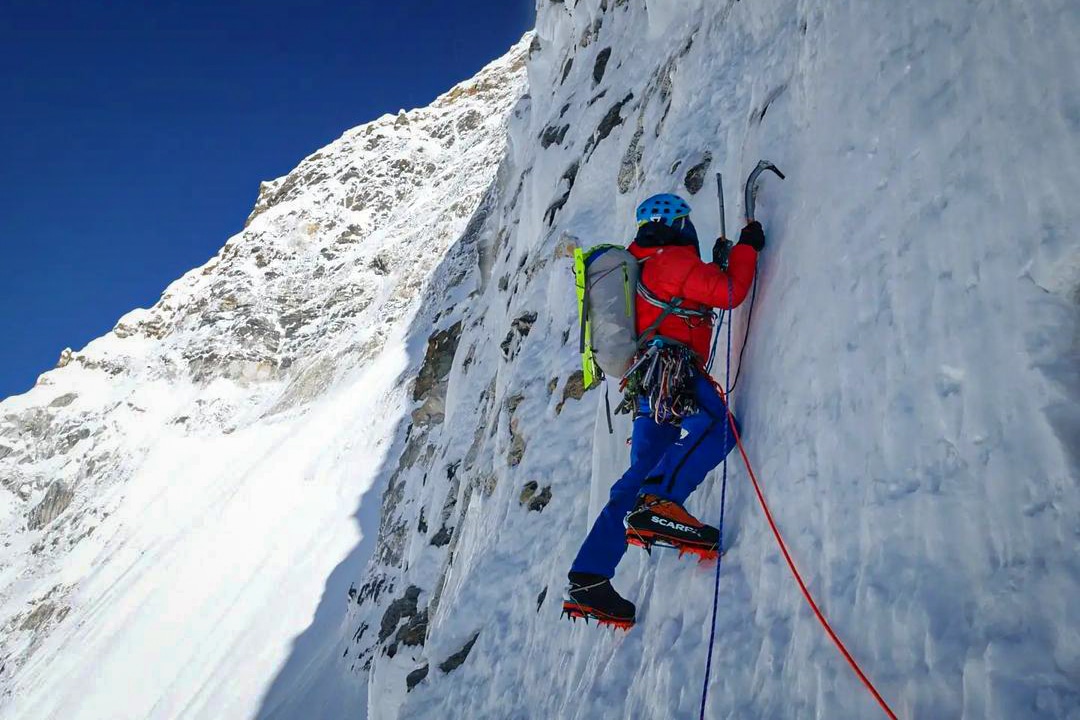 Benjamin Védrines and Charles Dubouloz can be pleased with their route. The two Frenchmen took just four days to climb the north face of Chamlang (7,319 m) and descend its west ridge. Their seamless, alpine style ascent of a magnificent new line on this sought-after peak, which Védrines had already climbed via its north-east face, is a superb achievement. Speaking by telephone from Kathmandu, Charles Dubouloz describes what was undoubtedly one of the most elegant ascents in the Himalayas this year.

He may not have seen a single cloud throughout the expedition, but Charles Dubouloz, now back in Kathmandu, is on cloud nine. And not only because he has realised his dream of climbing in the Himalaya. During a short trip lasting barely a month, he and Benjamin Védrines have produced one of the year’s best routes, climbed alpine style, that is, without fixed ropes or logistical support. This is the story of two mountaineers who travel light, buoyed by their immense motivation — unquestionably the most important quality for anyone hoping to climb a north face at 7,000 metres in the Himalayas. But motivation alone is not always enough. Here, it was a combination of mental strength, exceptional fitness and luck with the conditions that enabled Dubouloz and Védrines to realise their dream on Chamlang, a popular peak this year. 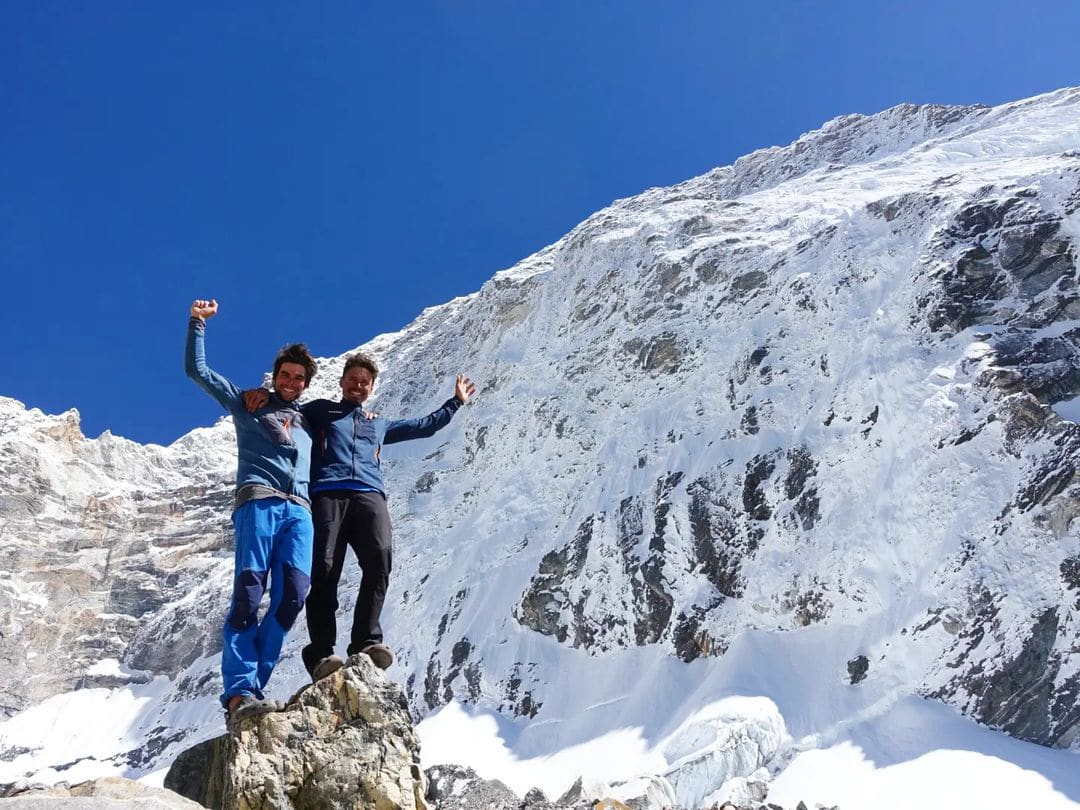 Back at the foot of Chamlang. Védrines on the left, Dubouloz on the right. Their route is to the right of his left hand. ©Dubouloz-Védrines

“I’d never been higher than Mont Blanc”, admits Charles Dubouloz. “Benjamin Védrines had been up to 7,240 metres on Chamlang in 2019, with Nicolas Jean [via the north-east gully: editor’s note]. So, the altitude was an unknown factor for me; I didn’t know how I’d react.” Védrines and Jean’s adventures in 2019, during which they had eyed Chamlang’s north face, appear to have whetted Védrines’ appetite to go back. Two Czechs, Marek Holecek and Zdenek Hak, had climbed the north side of the mountain in 2019, via a hard route that involved four bivouacs. But their line was on the north-west face, not the north face itself. This autumn, four French climbers — Fanny Schmutz, Damien Tomasi, Aurélien Vaissière and Symon Welfringer — had also set their sights on Chamlang, aiming for the oft-tried north pillar. Dubouloz and Védrines’ goal was the true north face. What gave them their edge? “The fact that Benjamin had already seen the face. We already had an idea of the line we wanted to climb before we got here.”

“We got to Nepal on 23rd September, just after the country had opened up again. Given the uncertainties around flying in, we drove as far as we could by jeep and then did a four-day trek through the jungle, which was great, as long as you could stand the leeches!” They acclimatised on the friendly slopes of Mera Peak (6,476 m), which nevertheless gave Charles Dubouloz a few “bouts of nausea and vomiting.”

Together with the two teams heading for the north pillar, they set up basecamp in a beautiful spot looking across to Chamlang’s north face – plastered in snow. The atmosphere was relaxed, but there was still a big unknown: Was the face in condition? Or was it covered in loose snow, just waiting to sluff off? “We were hoping for “fast” snow, hard snow that is almost ice, that axes go into easily, but your feet don’t sink in. The only way to know was to go and see.” After a rest day, they set off on a reconnaissance, climbing two pitches to get a feel for the conditions. Jackpot! The snow was hard. Perfect conditions. 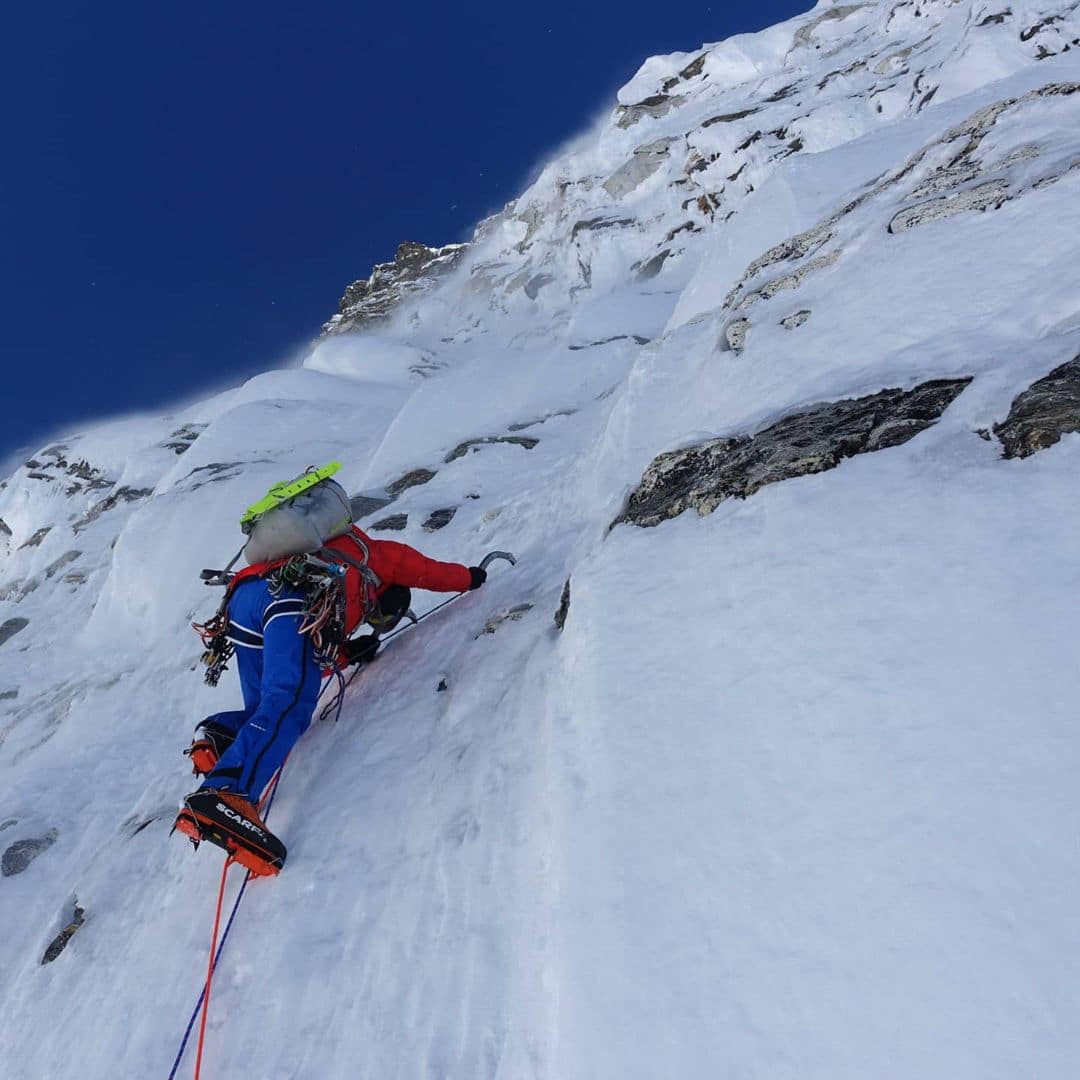 I didn’t expect the line to be so sustained. It’s steep the whole way, with no real ledges on which to take a breather.

Before setting off the two climbers checked in with their weather router: the good weather would last five days; only the wind might be a problem. “I’m a very optimistic person. We assessed the situation and decided that we were extremely motivated and that we had to grab the occasion”, Charles tells me. After a night at advanced basecamp, at 5,300 metres, they set off up the north face, 1,600 metres from the bergschrund to the summit. The line looked like the north face of Les Droites, but with Les Courtes on top!

The first bivouac was an ordeal, the second hellish. The face was much steeper than they expected. “It’s desperately steep. We were front-pointing the whole way, our calves on fire. That evening, at the foot of the step, we put up the tent as best we could, partly hanging in space, at 6,400 metres. There was spindrift all night and a little block of ice tore a hole in the tent. We didn’t get a lot of sleep.” 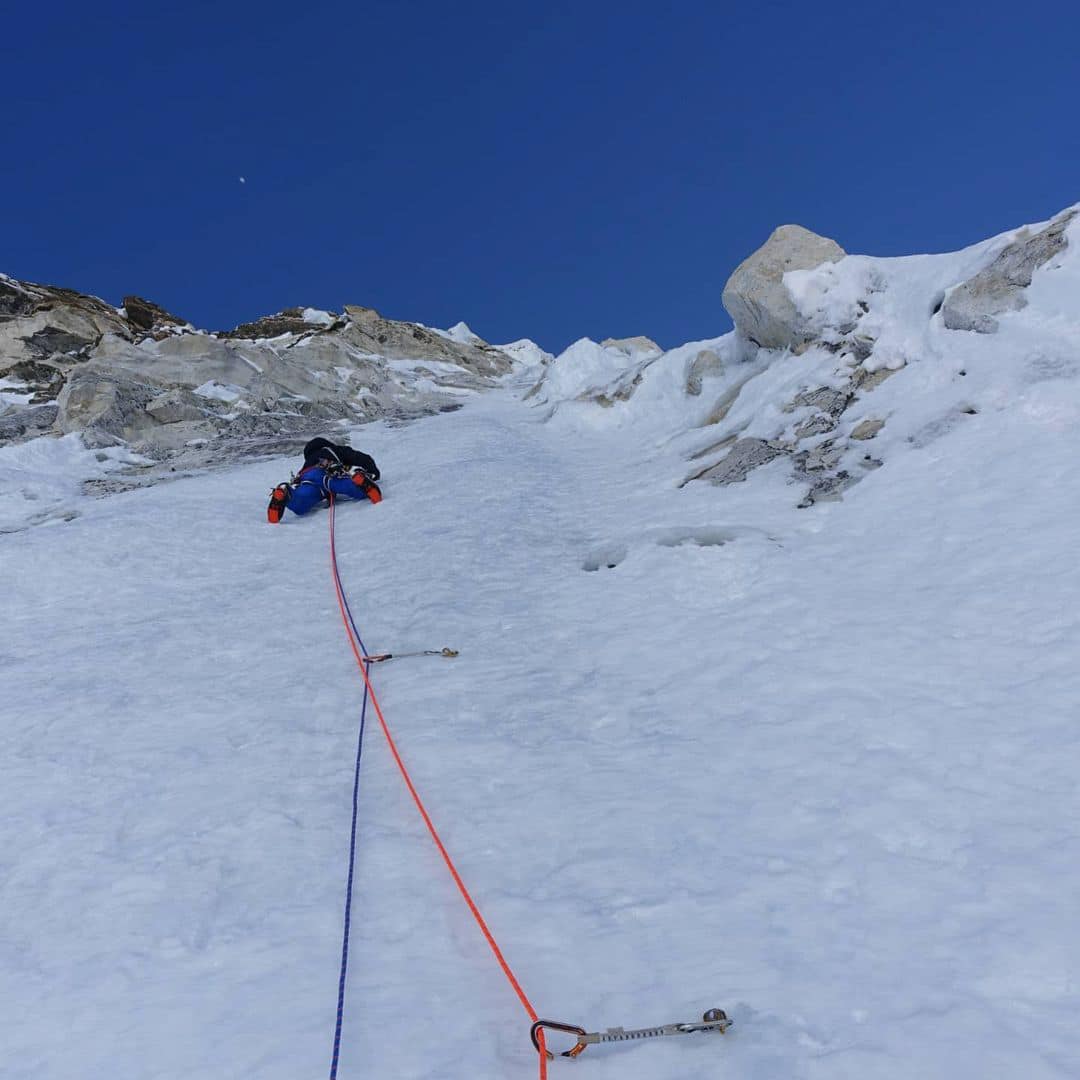 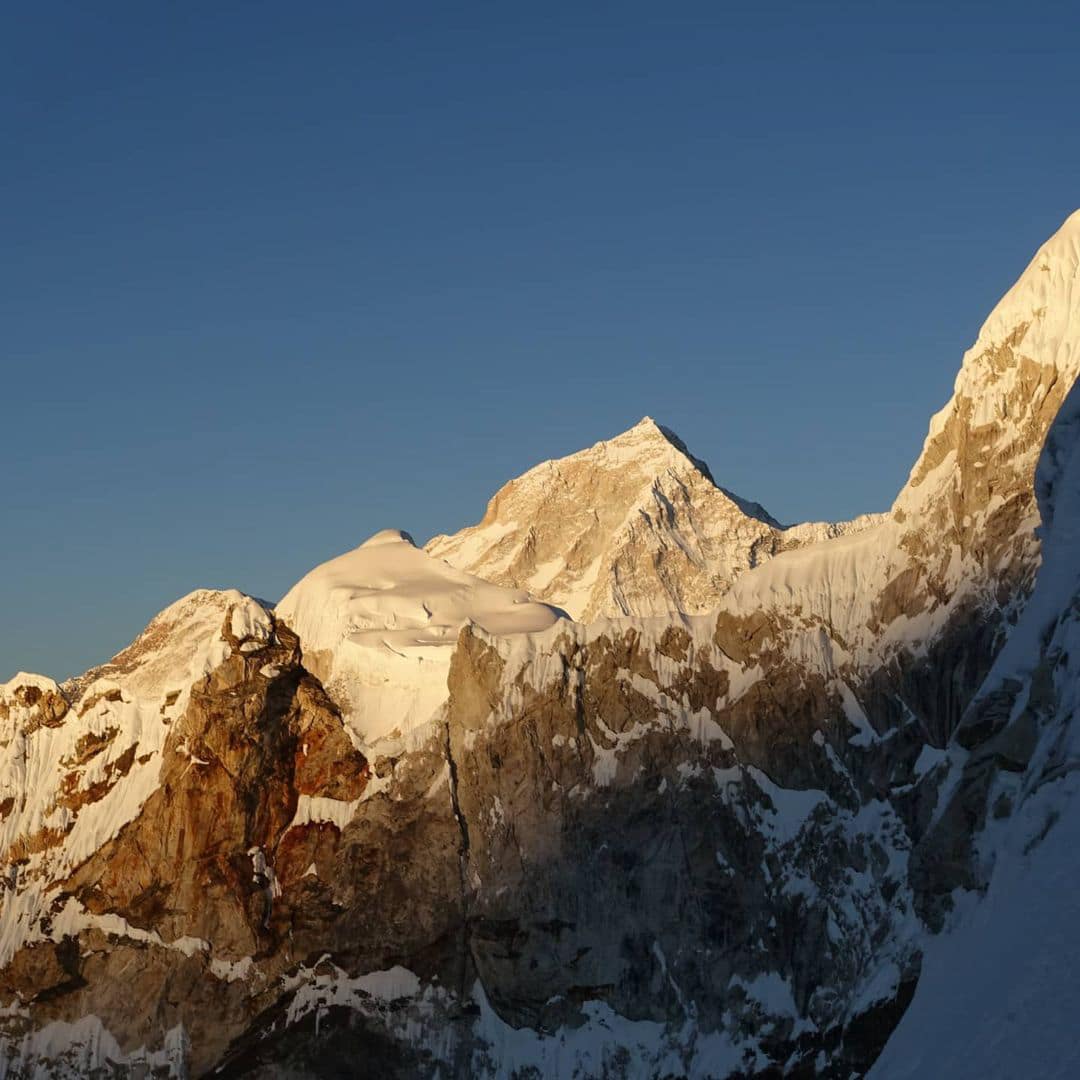 The crux, the next day, wasn’t enough to stop them, despite a sketchy traverse across an ice smear. “Undoubtedly one of the most difficult pitches on the route, both for Benjamin leading and for me seconding with the heavy sack.” The second bivouac, at 6,700 metres was just as punishing: snow kept swirling down all night, filling the tent. It was an horrendous bivouac”, admits Charles. “We hauled the sack up the entire steep section. I didn’t expect the line to be so sustained. It’s steep the whole way, with no real ledges on which to take a breather.”

Day three: two technical pitches and a traverse right took them to the sunny spur on the edge of the north-west face and the route climbed by the Czechs. Imagine their joy after spending two days (and nights) in the cold and shade of the north face. “Fortunately, we weren’t post-holing too badly and we eventually got to the wide, summit ridge. Just as well, as I was collapsing with fatigue every ten metres! At 7,200 metres, I was completely wasted. It was really hard, but I wanted to get to the summit, as did Benjamin.”

Where we scored was by moving quickly, climbing the 1,600 metres with just two bivouacs, and no more. 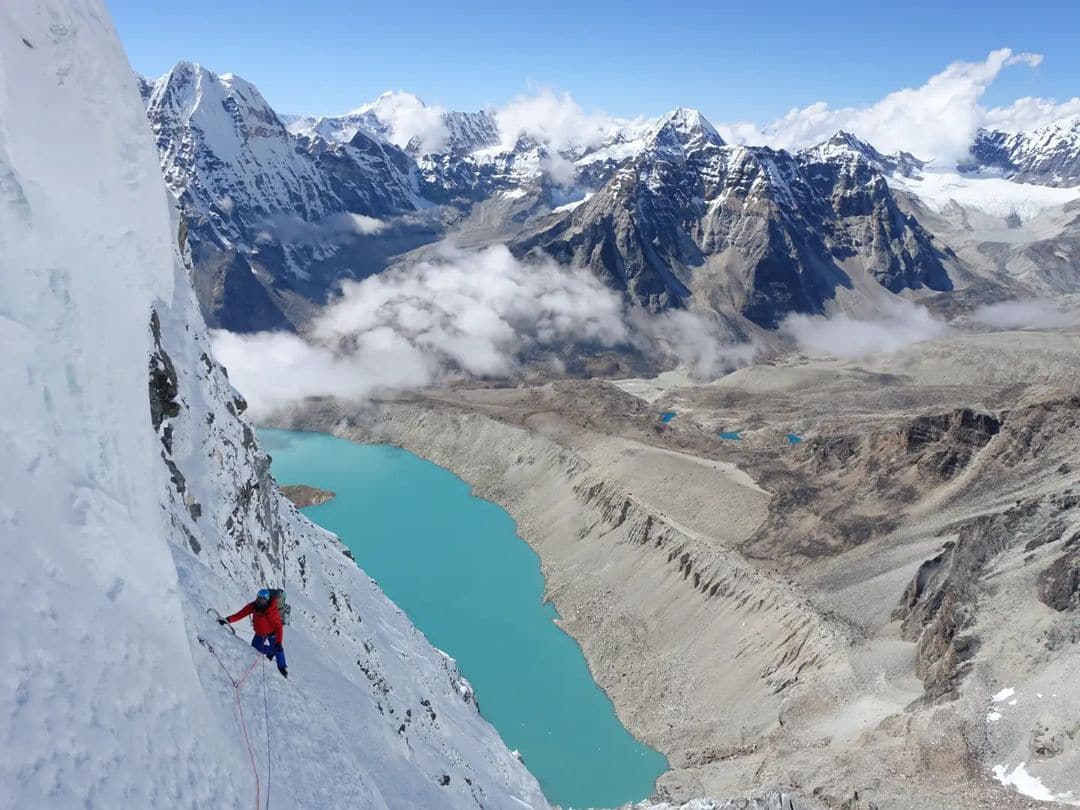 Summit at 3 pm. The view? Unforgettable, with Makalu right there. The descent? The two climbers quickly scrambled down the west ridge, a sort of normal route, until they got to a “proper” bivouac “on the flat” at 6,600 metres. They made it back to basecamp the next day and met up with their companions, who had had to retreat from the north pillar. That’s the way it goes sometimes: two teams can have very different experiences, even on the same mountain.

Numerous factors come into play, but Charles has an idea as to what went right for them. “Climbing as a twosome was a bit ambitious. Even after seeing the conditions, setting off up the route was a leap into the unknown, with the step in the middle. It was a gamble. But Benjamin and I have the same way of climbing, of doing things. He’s undoubtedly one of the world’s fittest mountaineers at the moment. I also come from endurance sports, so we have that in common. Where we scored was by moving quickly, climbing the 1,600 metres with just two bivouacs, and no more. The face is so steep that bivouacking is difficult. Retreating would also have been very complicated, so it was a very committing climb.” Committing it certainly was, just two of them climbing in the very pure style many people call “British” in reference to the adventurous approach pioneered by the likes of Mick Fowler and Nick Bullock.

Why did they name their route A l’Ombre du Mensonge (In the Shadow of the Lie)? “Some climbers overstate their accomplishments, consciously or otherwise. Routes in the Himalayas are rarely repeated, so you can only speculate on how hard they actually are”, Charles explains. In fact, their route is very close to the sunny Czech route, which earned its first ascensionists a Piolet d’Or.

A final word? Charles is still reflecting on the energy they put into the trip and the time spent away from his family. “I was so happy when I got to the summit. I’m still feeling that euphoria. I think back to the time on the wall. I have trouble sleeping, still excited from the four days we spent up there. Perhaps the best four days in my mountaineering career.” 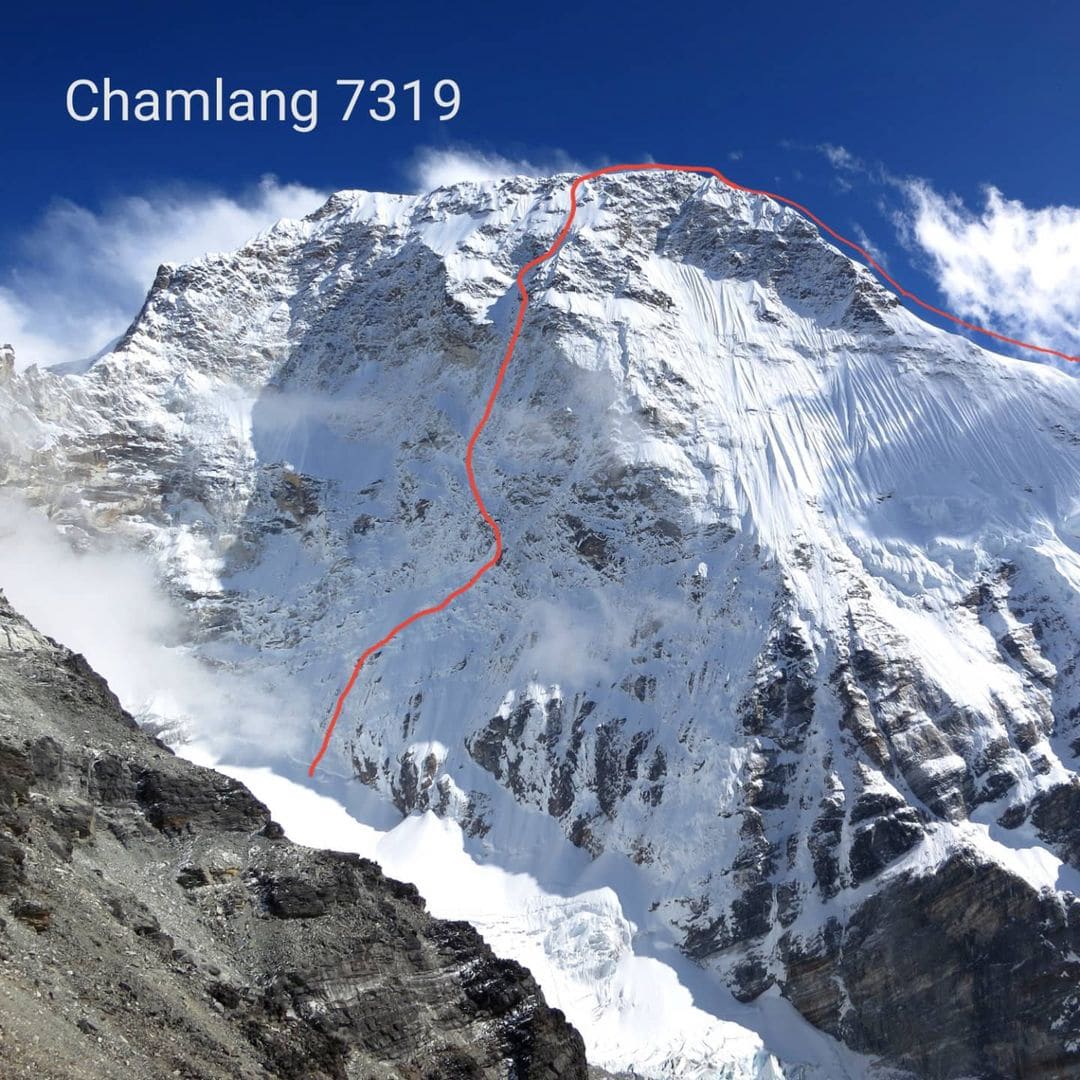