Fancy Mont Blanc far from the madding crowds ? The Grands Mulets achieved it. From May to early summer, you have everything to gain doing Mont Blanc backwards. The idea ? Hike and ski in the Balmat and Paccard passes before reaching the summit via the north ridge of the Dôme du Goûter, and descending the north face. Jackpot ?

Iknew he liked to whinge, but at some point, I had to draw the line. Listening to Whinger 1st, you’d have thought we were setting out on a never-ending sea voyage, more like the Route du Rhum than the Costa Sardinia. On the way to Grands Mulets hut (3,051m, 10,010ft), we get it all : the traverse on skis from Plan de l’Aiguille which is too flat (when do we get to do any turns ?), then the famous Junction traverse, a more or less passable chaos (less at the moment) between the Bossons and Taconnaz glaciers which is too slushy (when can we get our skis back on?) and finally the roped ascent to the hut which is too far (are we nearly there yet?). However, stepping foot on to this stranded raft at the top of a rocky peak, you’ll be sure to sail away. So, it was time to share some stories from a not-too-distant past.

First glance of the Goûter Dome and the hut, indistinguishable on its rocky spur. ©Ulysse Lefebvre

The Junction, a mess of jumbled ice between Bossons and Taconnaz, well equipped with ropes by the keeper. ©Ulysse Lefebvre

The right and the wrong story

It all started out well for Grands Mulets. In the year of our Lord, 1786, in August, two holidaymakers decided to spend the day on Mont Blanc. Never been climbed before ? Crowned with terrifying legends ? What’s more, far-removed from the average Alpine climber ? No way ! Our two pioneers of mountain tourism were equipped with walking sticks (or alpenstocks as they were known at the time), and decided to set off on La Côte mountain, on the most direct route to the summit in sight. While they decided to overnight up there, it wasn’t on the site of the current hut, built in 1960, but on the site today named ‘Balmat gite’ on the IGN maps that Jacques Balmat, fittingly (it’s a well-weaved story) and Michel-Gabriel Paccard used. The next day they made a beeline for Rochers Rouges (Red Rocks) – morale high – before reaching the summit, via the north face, if you please. Suffice it to say that this route is laden with history. Following the first ever path to a summit which is today trampled by thousands, almost makes you feel like a pioneer.

Yet, the story also has a darker side which tarnished the image of Grands Mulets for a long time. Not far below the hut, an area of seracs sees mountaineers and skiers quicken their pace on approach.  The accident in 2003, which struck down three young mountaineers among a group of young members of the French Federation of Mountaineering and Climbing, left a deep scar on collective memories. The section is no more exposed than Tacul or the Goûter corridor. It is unquestionably an objective risk which one must bear in mind. The risks may be reduced by steering as far clear as possible and not picking up the pace…

Nowadays, the Junction also holds back a number of hopefuls. Yet, it is almost always passable. Ludovic, the hut keeper for ten years, is a sight to see working away in this chaos of ice and snow. With axes, ropes and unfailing motivation to offer his passing climbers the best possible welcome, Ludo marks out routes, sets up fixed ropes and makes the section much safer and clearer for the public.

The troubling serac front, downstream from the hut. ©Ulysse Lefebvre

It is easy to complain about Mont Blanc’s excessive visitor numbers, the type of tourists it attracts, or the extortionate fees when you’re broke. So, it’s sometimes advisable to check out the other side. But before heading to the southern side, in Italy, the Grands Mulets route offers a whole host of advantages in terms of progress. Here’s a run-down of them as the holiday traffic builds up :

Who has never been told
that it’s a great idea
to do Mont Blanc on skis ?

THE HUT IS A GOAL IN ITSELF

First steps on skis along the back, on the north ridge of Dôme. ©Ulysse Lefebvre

Les Bosses ridge, the final straight (and curve) to the summit. ©Ulysse Lefebvre

When we met Ludovic in 2017, he told us that even more so than elsewhere “you have to enjoy solitude to be a keeper at Grands Mulets”. “There have been weeks go by when I haven’t seen or spoken to a single person.” No-one, at all ? Some say that Ludo talks to the rocks, leastways, he makes visits to some of them, like the huge erratic block lying just below the Junction which has a certain pull factor…It must be said, the hut has been somewhat abandoned over recent years, due to the reputation we referred to, but also a lack of awareness of the advantages of this hut and the route, such as extending the ski season, moreover towards a goal of choice : “The best time of year to ski on Mont Blanc is around the beginning of June, just when most people are packing up their skis and transitioning to on-foot mountaineering. Generally speaking, at this time, there is no more ice on the north ridge of Dôme, it is less cold, the days are longer, and the risk of snow is lower with spring snow conditions.” 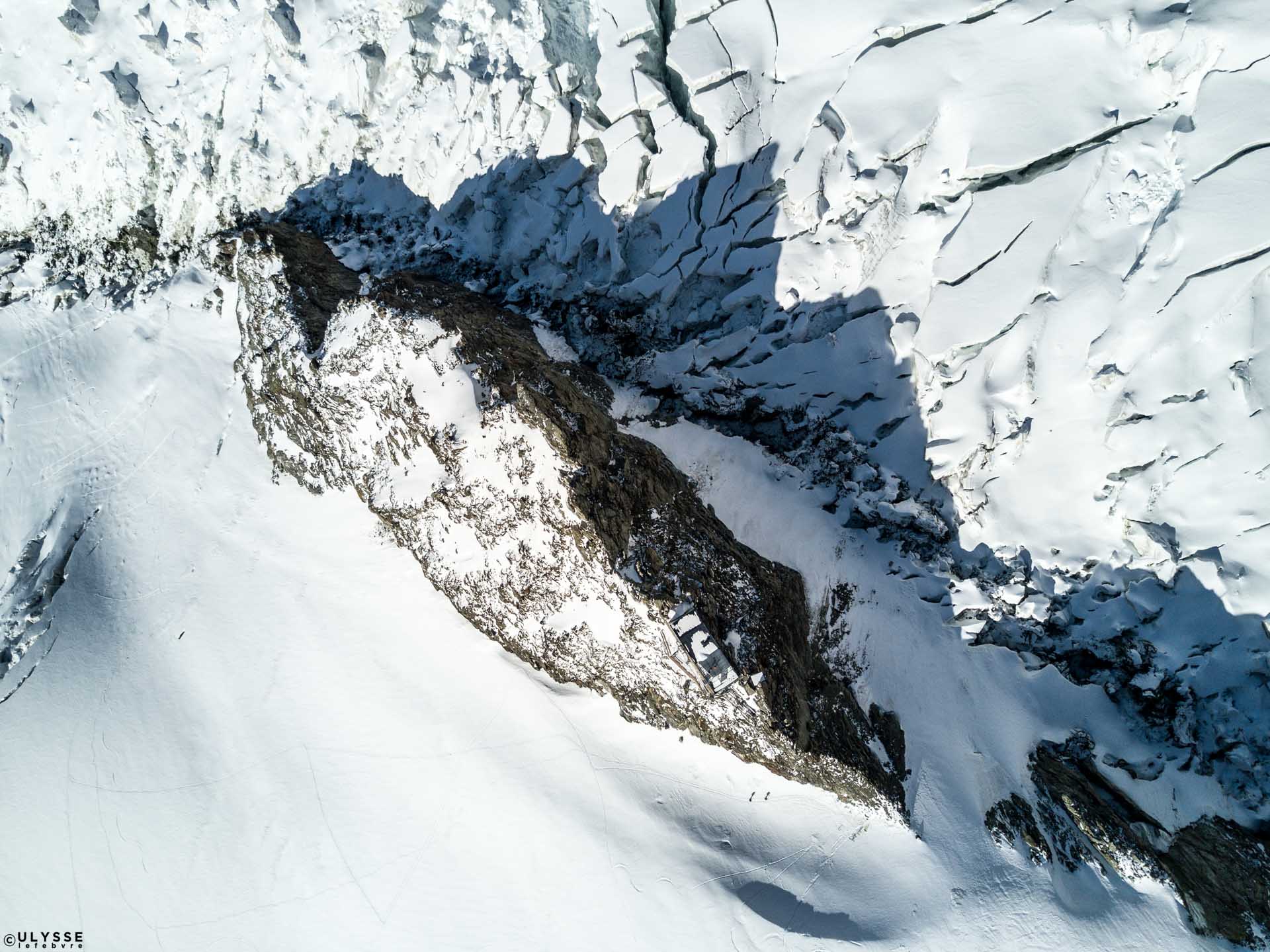 Can you spot the hut perched on its rock ? ©Ulysse Lefebvre

What Ludo doesn’t say, is that he has been working like a madman to make his hut as welcoming as possible, on another level even. Thanks to many conversations, this fan of mountain literature has managed to put together an impressive collection. “In the beginning, there were just my books, then, little by little, I received more and more from partner publishers, like Guérin and Glénat.” Outcome : over 500 works to get your teeth into, from comic books to tales of expeditions. Quite enough to satisfy a few nights spent up there. And the froth on the cake: Ludo has been brewing his own beer for the last few years, using glacier water. While it doesn’t (yet) have a label or name, the range is full of character : from lager to ale, bitter to hops beer and American pale ale… Watch you don’t throw back anymore, you’ll sleep through your alarm !

Certain mountain sleuths make no mistake about it. One of his regular customers is none other than Christophe Prot himself. The guide likes to bring his customers here. He has even conceived another access point through Combe Maudite, arriving directly under the Cosmiques corridor then the hut, bypassing the Junction. “Christophe has taught me an awful lot, taking the time to explain techniques to me. It’s thanks to him that I know how to equip the Junction and set up fixed ropes. He is a great source of inspiration for me.”

These days, Ludo is hoping that the hut’s glory days will soon be back. “I have been working here for many years, and I really believe in the place”. It is up to us to prove him right, and to continue the story by deciding to take the plunge.

Two tiny skiers hidden on the huge north face of Mont Blanc. Can you spot them? ©Ulysse Lefebvre