Magnificent new lines climbed on Ushba and Ailama in Georgia 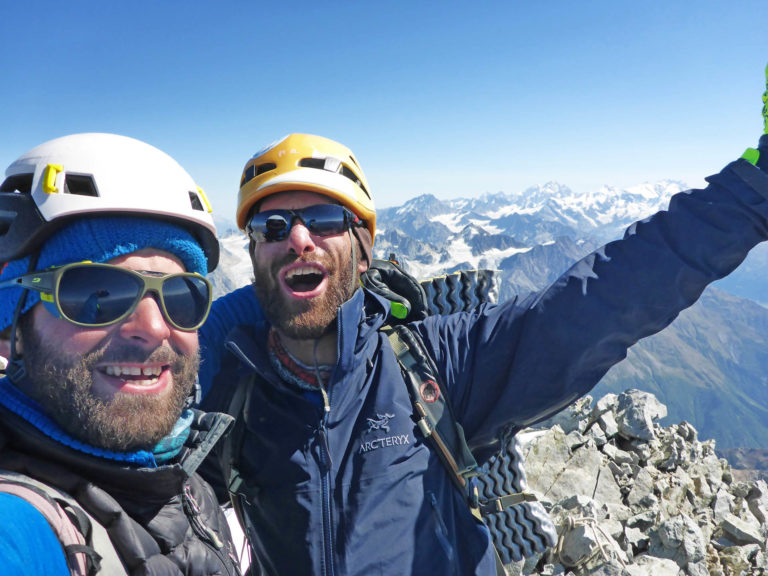 The two Georgian climbers, Archil Badriashvili and Giorgi Tenadze, made a name for themselves in 2019 when they climbed the Nanga Parbat in spring and then made stunning first ascents of the Pangpoche in Nepal in autumn. In 2020, Covid-19 hit and the pair, having welcomed Levan Lashkarashvili to make a trio, pulled out great home performances in Svaneti, with a first ascent of the north-west face of Ushba (4710m [14,564ft]) in five days and a first ascent of the south-west face of the impressive and totally unknown Ailama (4560m [14,960ft]). The Caucasus have always been a safe bet both for its peaks and for its climbers. Report by Archil Badriashvili.

Ushba is an iconic peak in the Caucasus Mountain range with its famous silhouette and double northern and southern peaks, located in Svaneti, a region in northwest Georgia. When you look at photos, or read stories and legends about these two peaks, they are hard to forget. But there is nothing like seeing them with your own eyes, as you are met by a vertical wall of gleaming granite that literally springs out from the base and leads all the way to the top of this impressive mountain.

Georgians were the first alpinists to do the first ascents of Ushba when Georgia was occupied by the Soviet Union. From that moment, the region started to attract the best climbers each year from all over the Soviet Empire. They saw Ushba as the ultimate challenge, and it therefore became a symbol of Soviet alpinism.

The routes became more and more difficult on some of the steepest slopes in the Caucasus. That is why, nowadays, it is so difficult to find new itineraries on the Ushba peaks. Ushba is a cruel mistress. No other mountain has such a dangerous reputation. There is no real easy way up or down. Many expeditions have failed and many lives have been lost on this beautiful mountain. 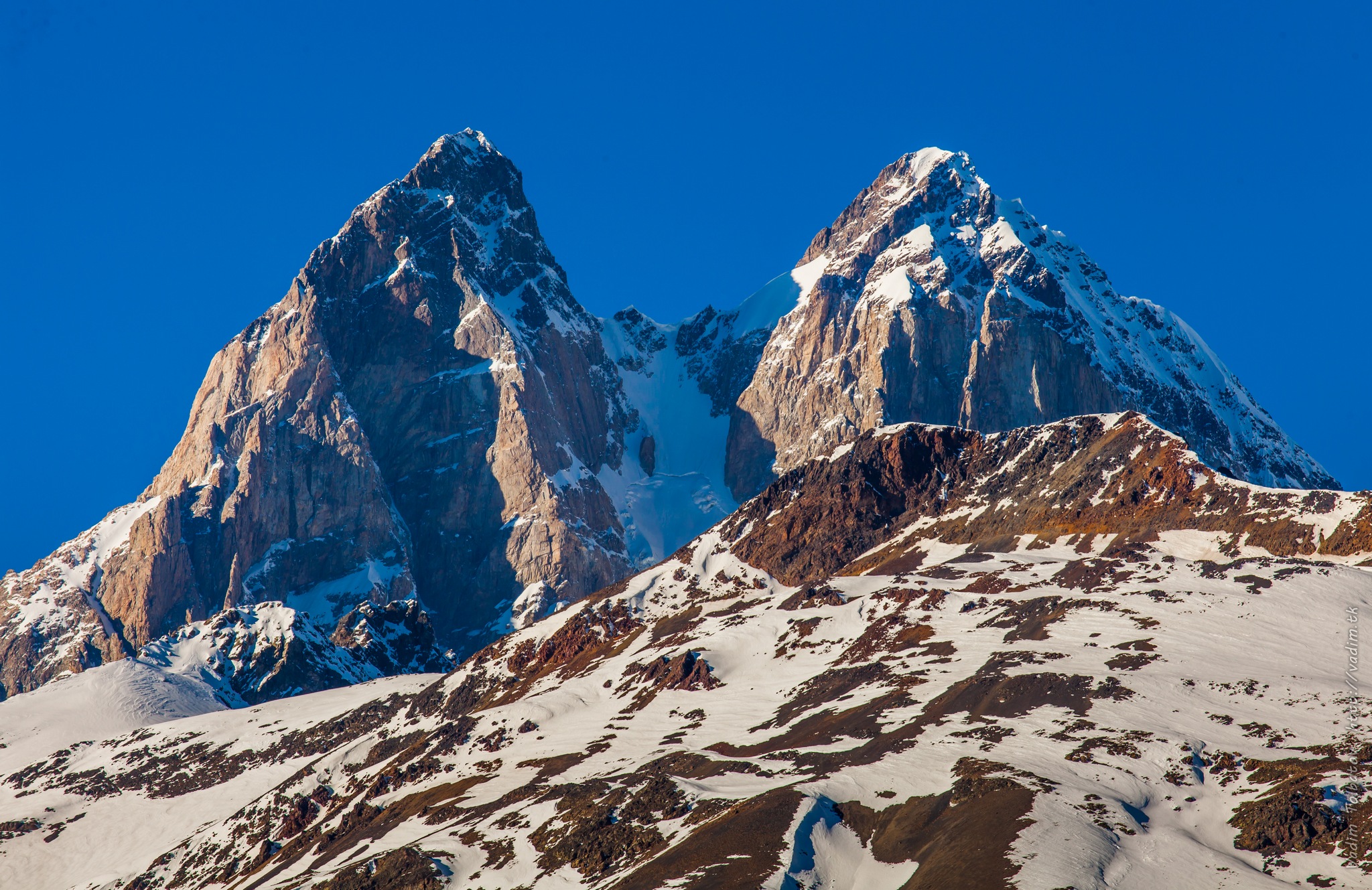 The southern and northern peaks of Ushba. The new route on the north-west face is located on the other side. RR.

After my successful ascents of both Ushba peaks via five different routes, I wanted to fulfil an old dream of mine. In July 2019, my friend and climbing partner Giorgi Tepnadze and I climbed the west face and at the time we had considered the idea of climbing the north-west face via another route. In September, we came back to Svaneti. Firstly, we went to climb Ailama (4560m, [14,960ft]) , a huge, long forgotten mountain in the Caucasus. Levan Lashkarashvili and I managed to climb the summit via a new direct route on the south-west face. It is a really wild line with a difficult descent.

After resting a few days, Giorgi and I were joined by my father, an experienced mountaineer and a real rebel who was one of the few to do alpine activities forbidden in the Soviet era, such as solos and ascents without official authorisation. He and our friend Gezi, a famous guide and Georgian personality, came to support us in Svaneti by staying at base camp during our ascent. This brought great team spirit and helped us on our expedition. 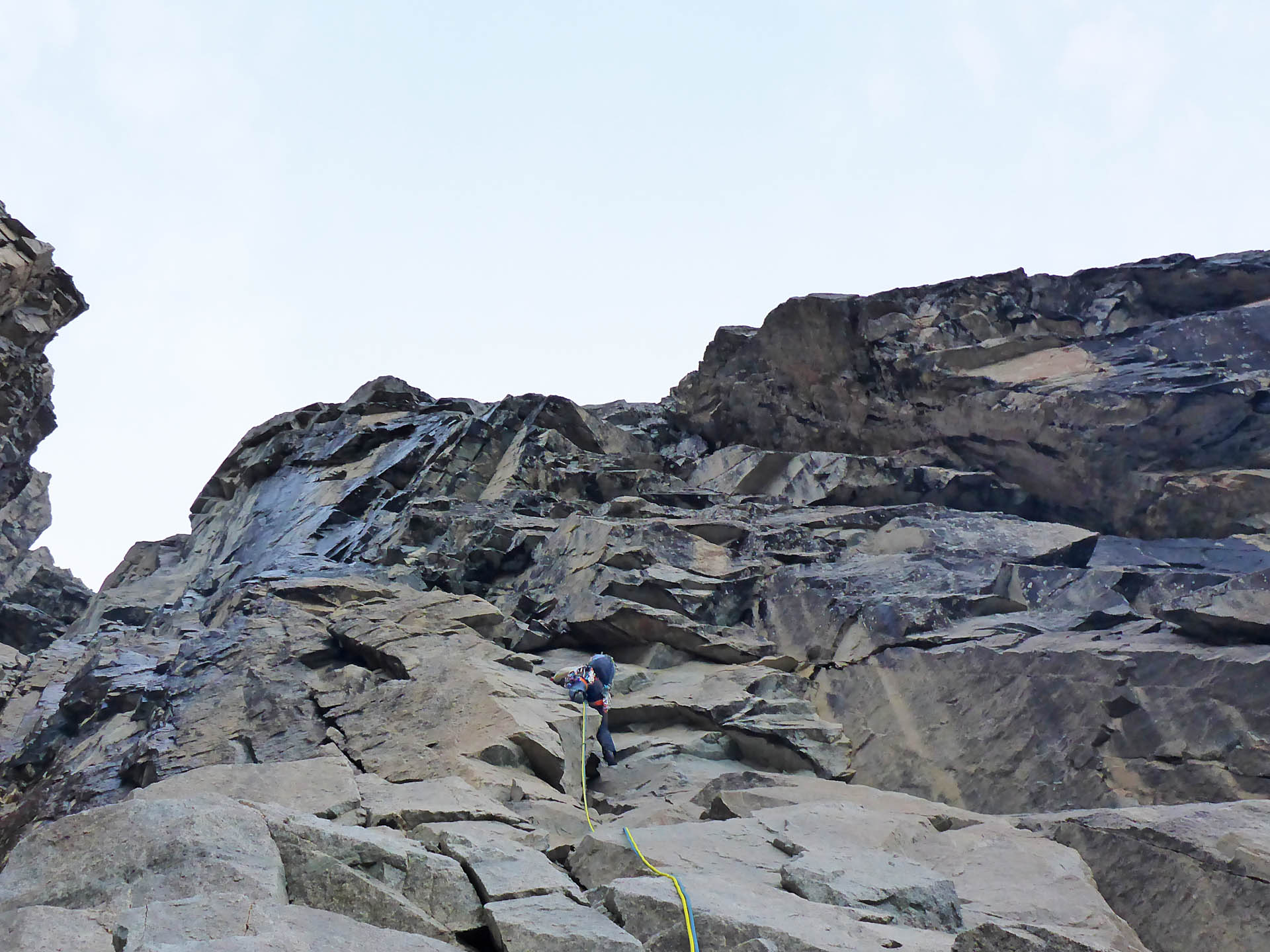 The north-west face of the southern peak on Ushba already had two established lines, on the right and left sides of the face. In the middle there was an overhanging wall that was yet to be climbed. The route right on the left of the north-west face, named Artishevsky, took more than 14 days to establish. As for the route on the right side, Grigorenko-Prigoda, this took 12 days. Artishevsky’s team received the Soviet Silver Medal in 1971 for this ascent and Grigorenko-Prigoda won gold at the USSR Climbing and Mountaineering Championships. Giorgi and I made the fourth known ascent of the Grigorenko-Prigoda route, first done in alpine style, and with a new variant of the route climbed over four days, plus a traverse of the two peaks. Giorgi and I received the Georgian Piolet d’Or in 2015 for our efforts. We knew that the wall would be a lot more difficult to climb in the middle than the route done in 2015, but this new route looked too good to resist. 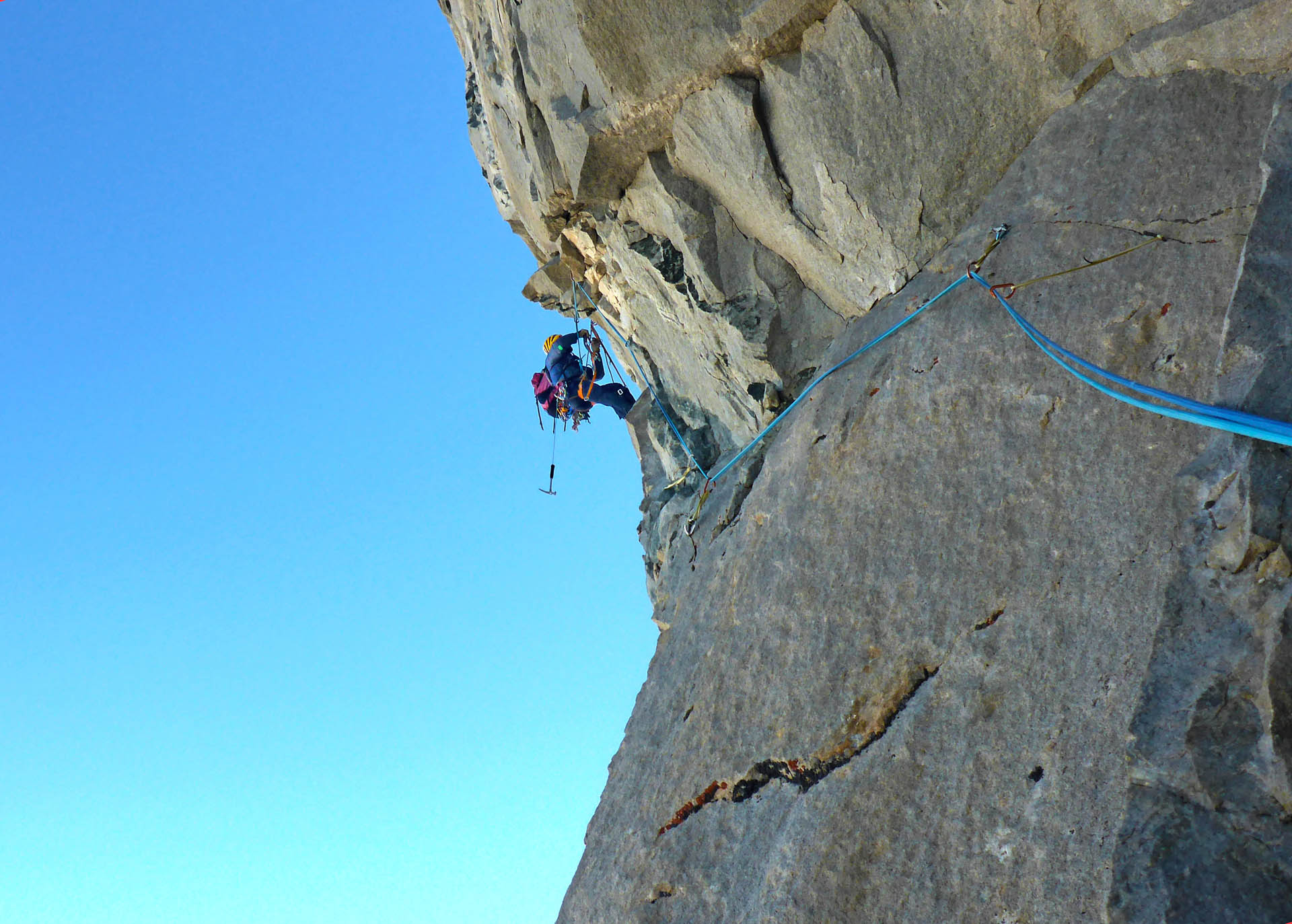 A mixture of free and artificial climbing on Ushba, 4500m (14,564ft). ©Archil Badriashvili

On the first day, we started from 2800m (9186ft). On the evening of the second day, at about 4300m (14,108ft), we started to climb the overhang. This included long pitches of delicate artificial climbing, mini cracks and dangerous sections. On the fourth day, we went past the point of no return to our little ledge at the foot of the overhang – from then on the only way was up. We did our best to climb for 20 hours non-stop on the last two pitches. In the early hours of the morning, frozen and numb from hanging in a harness for so long, I heard Giorgi shout out in happiness from the darkness :

– We’ve reached the top of the wall !

The day after, as we looked to make the summit, Gio’s shoes were so warn out that he could no longer attach his crampons, so we very carefully climbed using a mixed style to the summit and celebrated our efforts under the beaming sun.

The descent was another story, but to briefly sum up: it took us seven hours via the Gabrieli Route, on the other side of Ushba. After getting a bit lost on the trails, we found ourselves in the village by midnight, exhausted. My father, Gezi and my friends were waiting for us with Georgian wine and everything we needed after such an exploit.

Both Svanetians and Georgians were happy to hear the news and did not let us rest without celebrating the ascent as it deserved.

In the end, 2020 was a great year for Georgian mountaineers. Our friends and the new generation did their best by making beautiful repetitions of difficult routes, or high mountain classics. Congratulations to all those, all over the world, who despite this strange year, achieved personal goals or simply stayed strong. 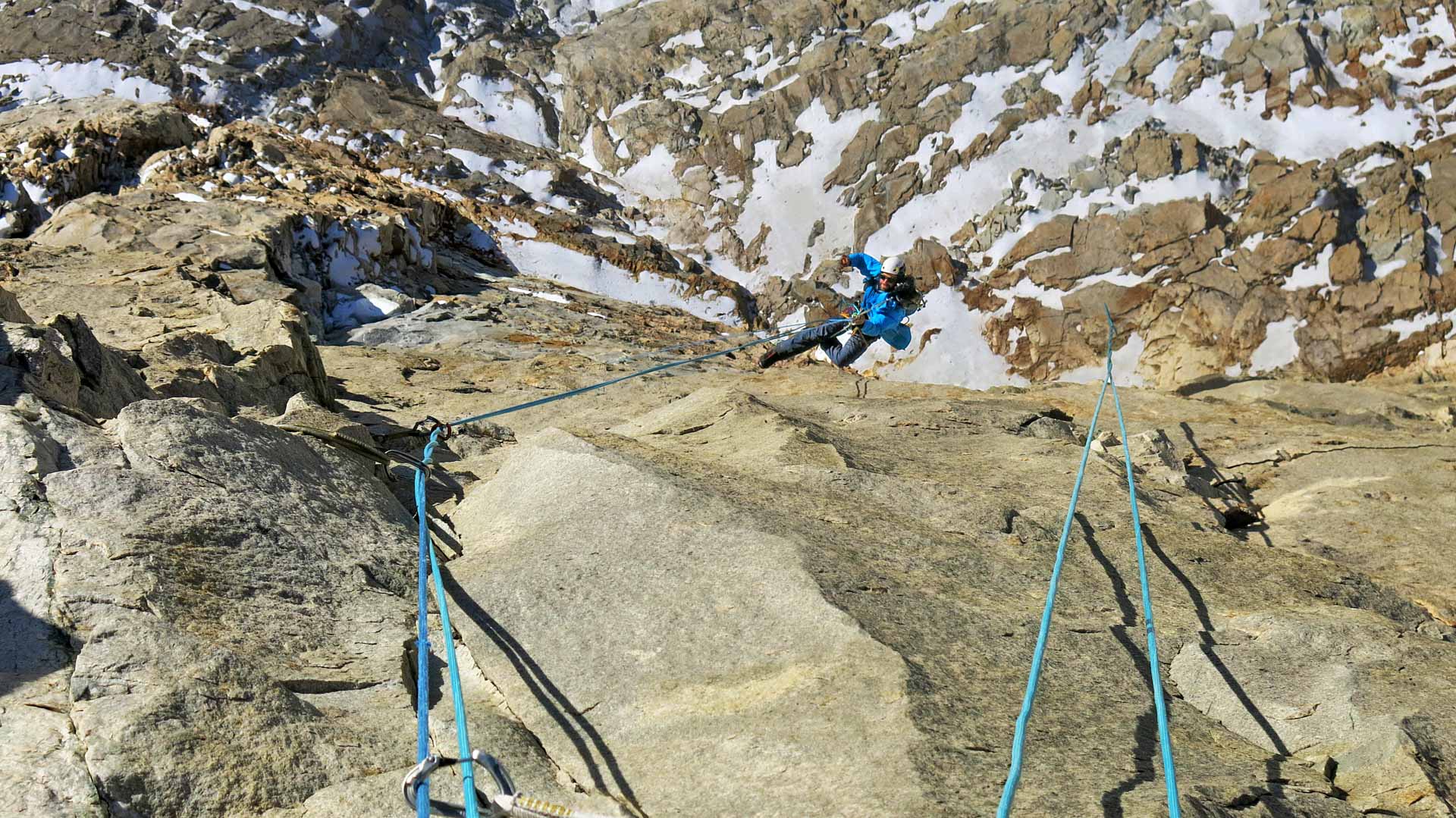 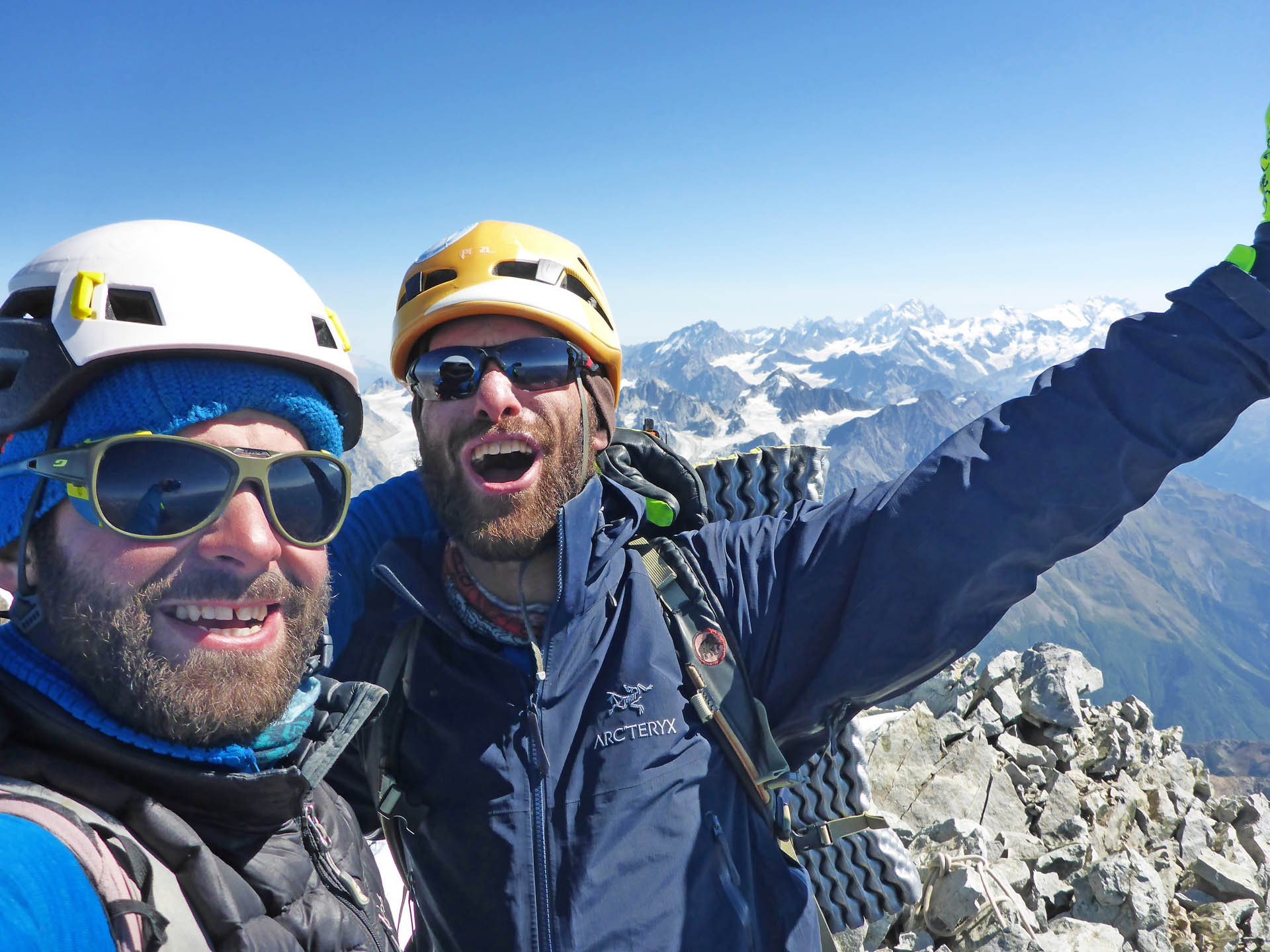 A happy Archil and Gio on the summit of Ushba © Badriashvili 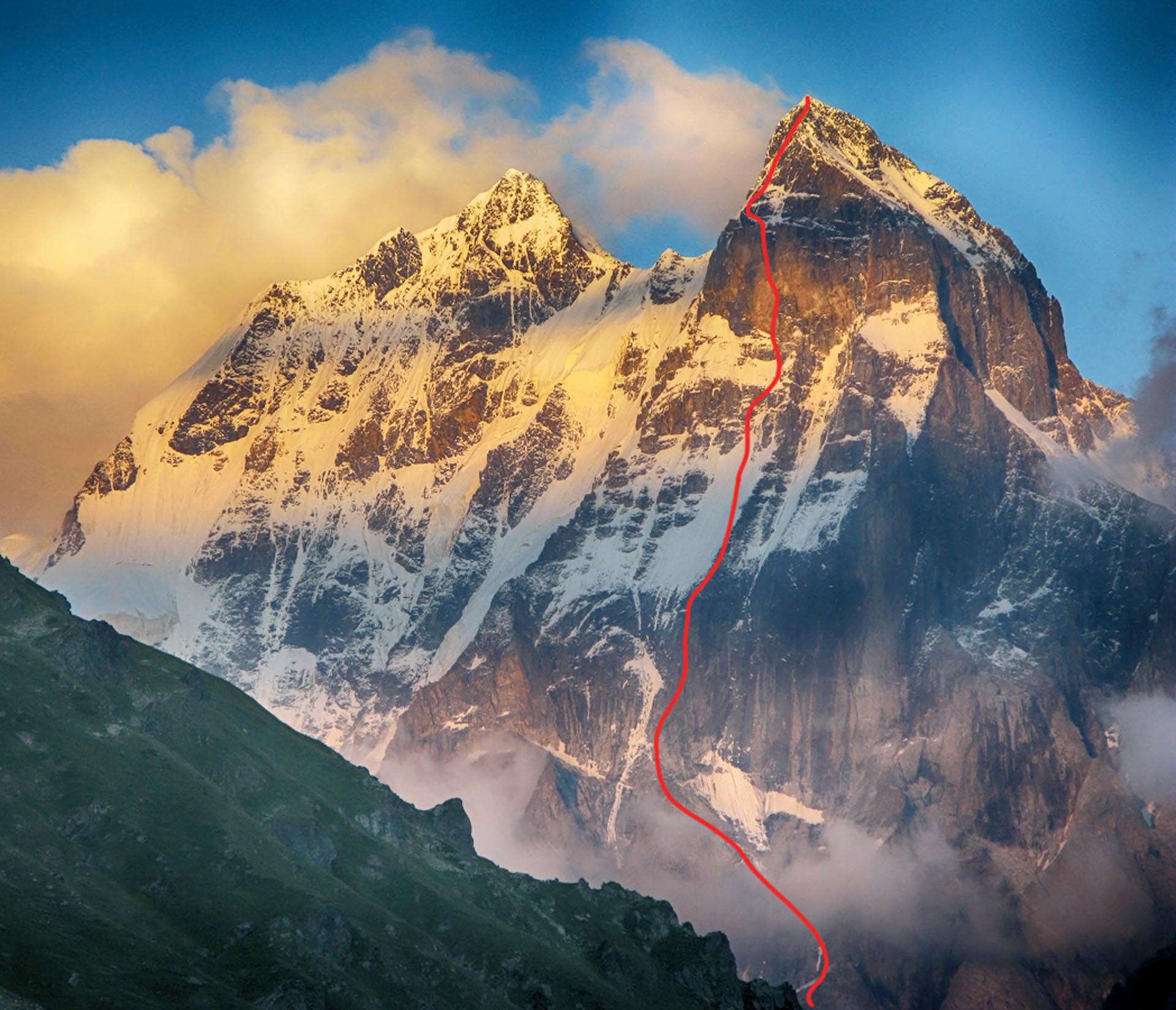 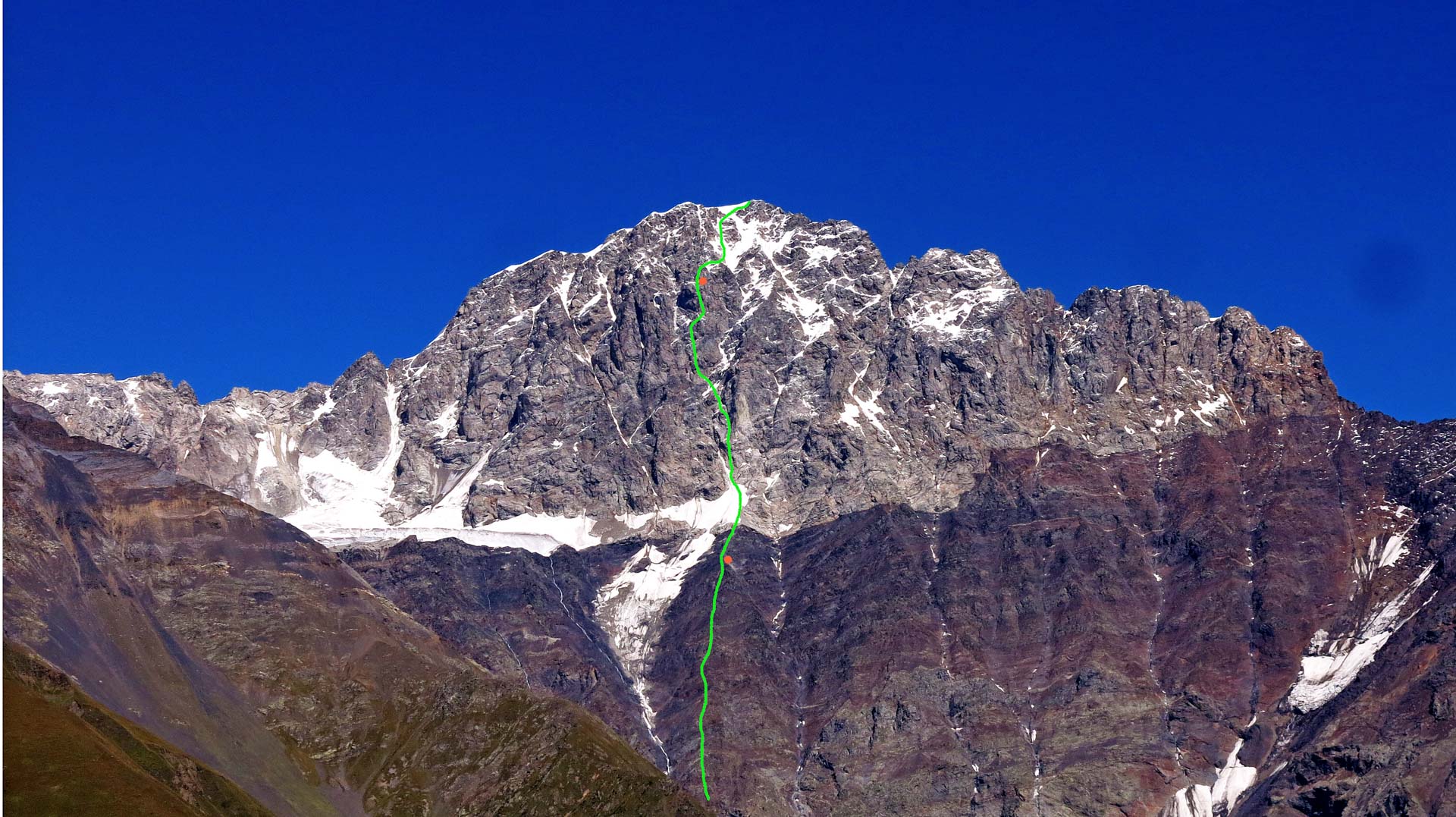