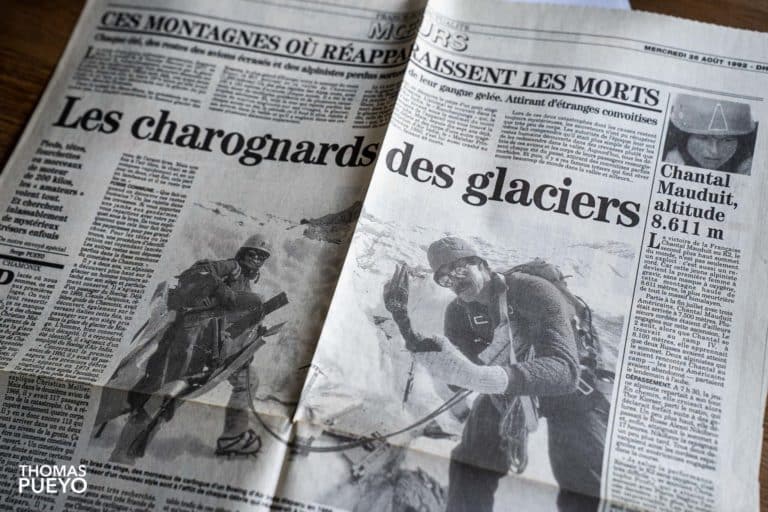 Article from French newspaper France Soir. The hand found is that of a monkey aboard the Air India flight that crashed in Mont Blanc in 1950 ©Archive Thomas Pueyo

On July 26, two French mountaineers discovered a corpse that had been trapped for decades in a Swiss glacier. The identity of this mummified man remains a mystery. With the accelerated melting of glaciers, more and more mountaineers who have been missing for decades are reappearing, freed from their shroud of ice. These exhumations are overwhelming for those around them and arouse a macabre fascination for what the mountains can do to us.

The White Hell of Piz Palü (1929), a masterpiece of German interwar cinema, tells the story of the torments of a mountaineer haunted by the disappearance of his wife in a crevasse, who returns again and again to the slopes of the mountain to find his missing beloved. If the story had been set back a century, perhaps the body of the unfortunate woman would have emerged from the glacier on its own, thanks to global warming, which is causing the ice tongues to retreat and the thickness of the glaciers to decrease.

It is because of this phenomenon that two French mountaineers, Vincent Danna and Luc Lechanoine, made a somewhat morbid discovery on July 26. As the team was about to finish the Haute Route between Chamonix and Zermatt, a colored shape stood out on the grayish surface of the Stockli glacier in Switzerland. “We quickly noticed the flashy colors,” says Vincent. At first he thought it was someone stopped on the glacier, tired or in trouble. “It made us deviate a