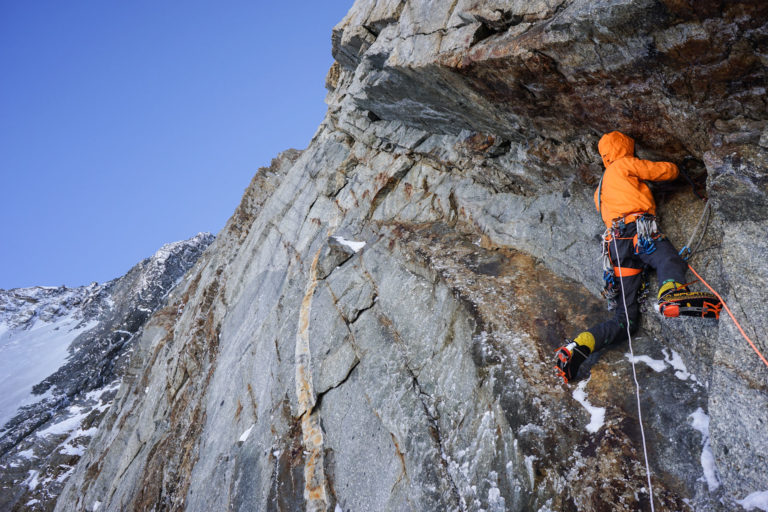 Britain’s Tom Livingstone made a name for himself in 2018 with his ascent of the north face of Latok I in Pakistan, along with Slovenians Aleš Česen and Luka Stražar. Having fallen in love with the French Alps, his goal this winter was to climb several famous big mixed routes on the most iconic peaks. With Matt Glenn, he climbed the Rolling Stones route on the north face of the Grandes Jorasses. Here is the story of their spicy winter ascent.

What draws us into the mountains, caught like a snowflake in a storm ? Could it be the aura of a route ? Could it be the reputation from the previous ascents, or the difficulty of the climb ? Rolling Stones on the north face of the Grandes Jorasses took six days on the first ascent in 1979 ; it was given A3/M6/6a/90° and has only been completely freed once in 2014.

Could it be the peak itself, luring climbers towards like rock’n’roll fans ? The north face of the Jorasses is one of the largest walls in the Alps ; it’s a kilometre-high castle. Within the Mont Blanc massif, it’s also one of the more real and adventurous playgrounds, creating a testing-ground for alpinists. This mountain matches some of the essence of alpinism for me : uncertainty, commitment and hard climbing.

Of course, it could also be the pleasure of climbing, which gives me a long-lasting, ‘after-burn’ of contentment. Nothing quite matches the feeling of reaching the summit