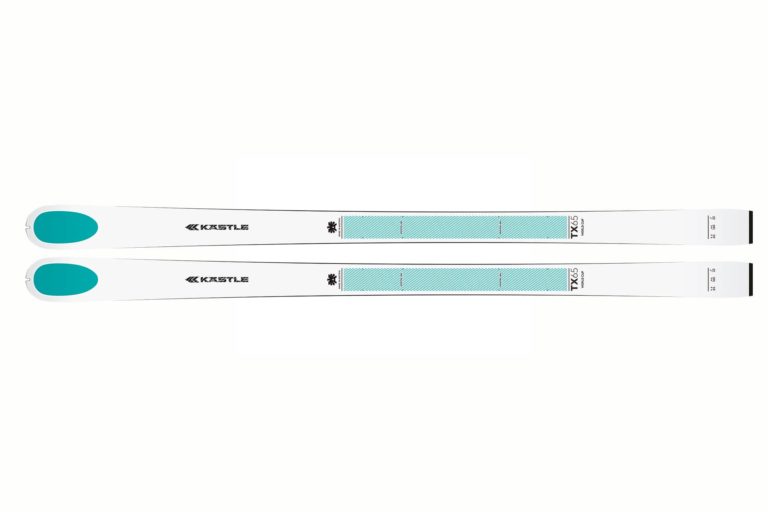 A genuine ski-mountaineering racing ski by Kästle. There’s no doubt, this Kästle TX65 World Cup is a step above the Dynafit Mezzalama. Like all these ultra-light racing skis (less than 700g for this Kästle!) that you benefit from real skiability but rather that you must deal with very flexible constructions and get the best out of the lightness. This is more or less the same for all skis in this category. You need strong thighs, good balance, and skill.

This Kästle TX65 World Cup is slightly more nipped in than the Dynafit or the Atomic.
You notice straight away that the tip sways, it makes tiny lateral movements but doesn’t chatter. As soon as you put pressure on the Kästle TX65, especially on the front, there’s a better output than most competing skis. You feel the material underfoot and that the ski is capable of moving, the flex is better than some, it’s more constant.

The Kästle TX65 World Cup skids very easily and has a tendence to oversteer. All the skids are instant (perfect for slipping down a gulley whilst holding a cord for example). Obviously, knowing how light these skis are you can’t feel them underfoot.

As soon as you use the edge you will discover a very good grip and the glide is also excellent.

What’s surprising? You can carve with the Kästle TX65 World Cup. Something we rarely (never) look for whilst racing. But it shows that you can ski with angulation, and throw your feet sideways if necessary. It is still a ski that you need to pilot on mid-boot/tail. In this position you are “almost” serene in chop (we’re not referring to crusty snow where you really need all skills possible and strong thighs). In these conditions we went up to 20 km/h faster with the Dynafit Mezzalama. The Kästle TX65 World Cup absorbs, it doesn’t vibrate through your legs, it doesn’t provoke any (bad) surprises, like crossing your skis. It requires a lot less energy than some models. It’s not pleasure because it is a demanding racing ski on numerous technical and physical points, but it is more accessible than certain models: whilst racing you keep energy in the descent, and your speed increases. It’s really a ski to consider for performance, a very sweet surprise. We didn’t know that Kästle knew how to make excellent racing skimo skis.

Ski test realized in partnership with our friends of Test4outside.com. Discover other ski tests on Test4outside.com
The logistics and access to the snow were facilitated by the support of Vaujany, Oz-en-Oisans et Espace Montagne Grenoble. Thanks to them !