SOLINE KENTZEL FREE CLIMBS GOLDEN GATE AT ONLY 21 (AND 6 YEARS OF CLIMBING!) 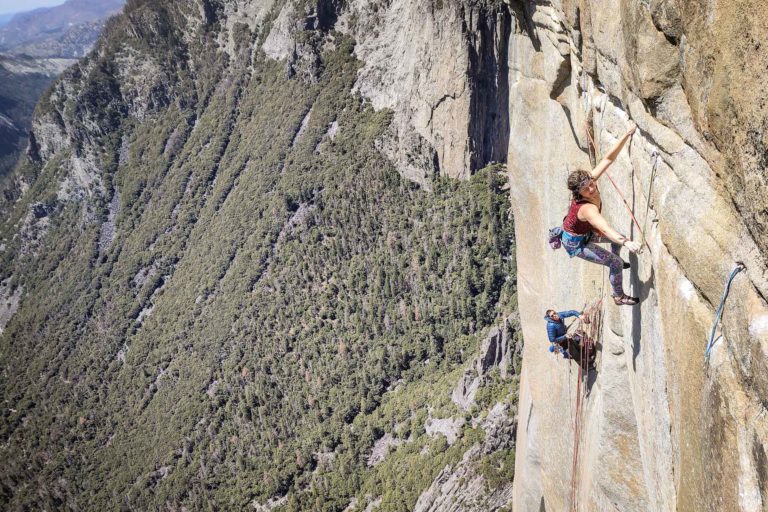 Soline Kentzel in A5 traverse, the last crux pitch (5.13a) of Golden Gate ©Coll. Kentzel

She is not the “best female climber in the world”, but French climber Soline Kentzel, who has only been climbing for 6 years, succeeded this spring in free climbing the Golden Gate route (1000 m, 5.13a/b), on El Capitan in California. She thus becomes, at 21, the second youngest woman to free climb a major route on El Capitan, 22 years after Beth Rodden. Here is her passionate story of her 9 days ascent, shared with Belgian climber Seb Berthe.

Have you already achieved your dream? I did, on Sunday 17 April, when I reached the summit of El Capitan (2,307 m, Yosemite, California) by free climbing each of the 41 pitches of the Golden Gate route (1,000 m, 5.13a/b). The ascent lasted 9 days, shared with the best companion, supporter and coach, the Belgian climber Seb Berthe (remember, the one from Alpine Trilogy Doggystyle with Nico Favresse). So, with this route, first freed in 2000 by the brothers Thomas and Alexander Huber, the same summer I was born in the countryside of Occitania (in Auch, Ed. note), I become, without a doubt, at the age of 21, the second youngest woman to free climb a route on El Capitan, after the American Beth Rodden (Lurking Fear route, 5.13c, 600 m, with Tommy Caldwell) at the age of 20 (also in 2000)*.

The Golden Gate ascent was not done in 9 days. The adventure started months ago, coming by sea and with a long and specific preparation. Moreover,