Piolets d’Or : to Ukraine with love

It was a beautiful January, the snow covered everything. Located at an altitude of more than two thousand meters in the South Alps, France, the Lautaret Pass road was closed due to avalanches, but that didn’t stop a team of Russian mountaineers from crossing the Pass on foot, in two meters of snow, to come to the Piolets d’Or, which took place in L’Argentière-la-Bessée. The gotha of the mountaineering world met at the Ice Climbing Écrins event. The late friend Gérard Pailheret, the organizer, could breathe a sigh of relief when he learned that “his” Russians, accustomed to camping for weeks on end in remote big walls, had climbed the Lautaret Pass on their feet without any problems – with a few bottles of vodka for our parties in L’Argentière.

Twenty years later, the Piolets d’Or have returned to the Hautes-Alpes (since last year). But this time, no Russians, double locked in a country run by a dictator. It is two Ukrainians who take the stage at the Théâtre du Briançonnais: Mikhail “Micha” Fomin and Nikita Balabanov, who have come to receive a “special prize” for their incredible ascent of the south-east ridge of Annapurna III, 7555 m, with Vyacheslav Polezhayko, during an 18-day epic at high altitude. Of which remains this famous photo of one of the three climbers at the top of a snow pinnacle, a fragile conquest of the useless. It was a century ago, in November 2021. Since then everything has changed. 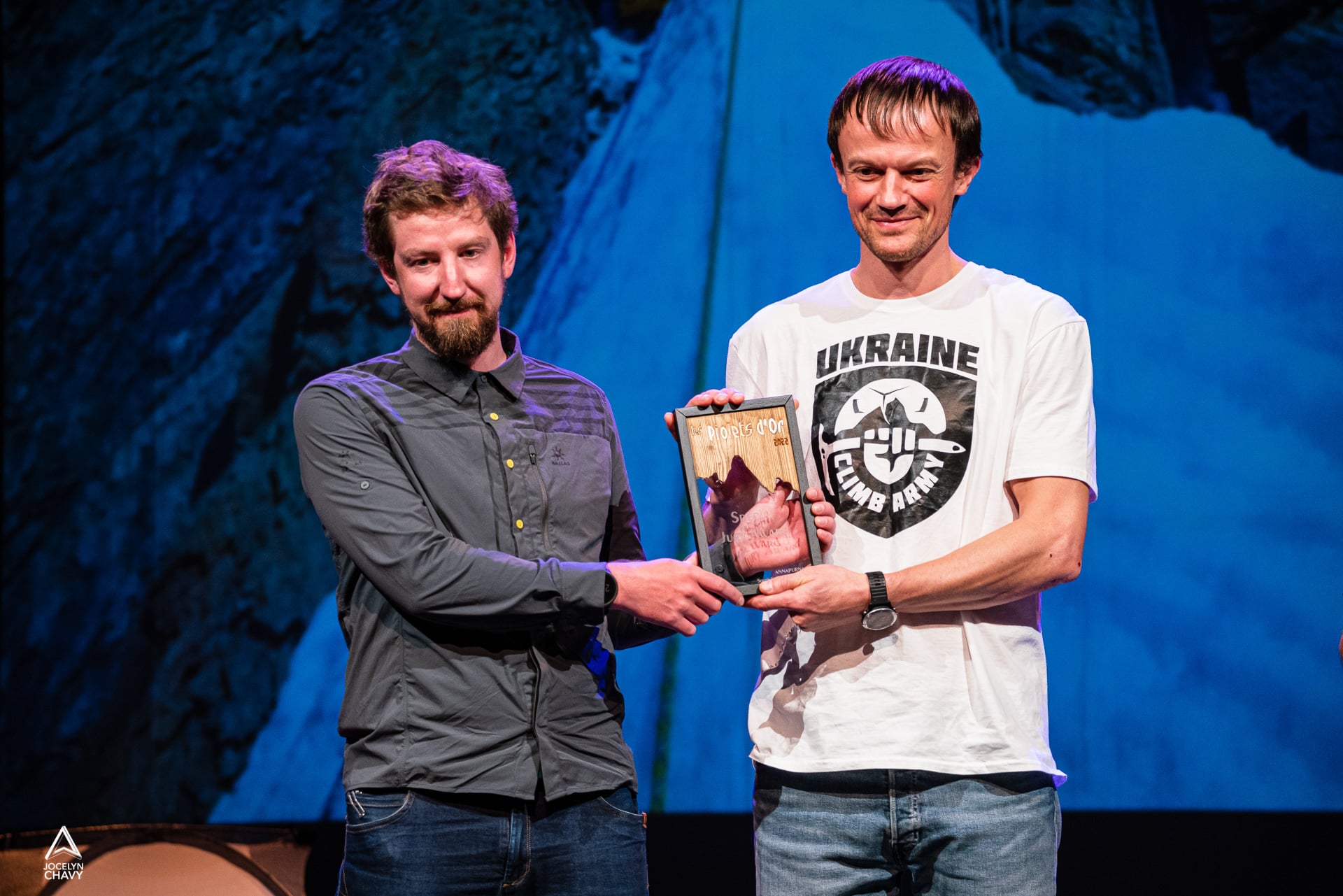 The war is at the gates of Europe, and it is no small thing to have recalled in the presence of the Prefet (official Authority) of the Hautes-Alpes and MP Joel Giraud. On stage, Nikita explains that he drove “one night and one day” to come from Ukraine. The bombs fall two days drive from here.

Micha wears a Climb Army T-shirt, the association of a Ukrainian mountaineer, Mykhailo Poddubnov, which raises funds for the war. The Climb Army video is played on stage, and the president of the GHM, Christian Tromsdorff, makes a speech. “The Piolets d’Or strongly condemns the aggression of the Russian state towards Ukraine. The war, actually already started in 2014, is now a real human disaster for most Ukrainians as well as for many Russians. We call for an immediate halt to this aggression (…) We also wish to express our full support for all Russians who have publicly opposed this war.”

Today, the Piolets d’Or show their support for Ukraine; although claiming to be “apolitical“, the event, which is first and foremost a celebration of high-level mountaineering, did not want to ignore the current situation, on the contrary. The fact that Nikita and Micha are present on stage means that mountaineering, which does not like borders or customs officers, cannot remain deaf to the world’s shocks. That symbols count.

the mountaineering elite is united. Just as a rope party stands together in the face of the distress of a neighboring rope party.

Mountaineering is not only the conquest of the useless, but first of all that of freedom.

The freedom to come and go. Sharing with other people, other cultures, sometimes very distant. Mountaineering is a history of exchanges, of cultures that are shared, as the Georgian Minister of Culture, Tea Tsouloukiani, testified on stage. We cannot ignore the fact that the country, Georgia, suffered a Russian invasion war. Or as witnessed by the life of Sean Villanueva, who receive the second Piolet d’Or of his career for his solo crossing of Fitz Roy. Born of Spanish-Irish parents, Sean is a Belgian who “lives in his car” and walks his modesty from the Czech towers to the needles of Patagonia.

The Ukrainians’ Annapurna did not receive a “real” Piolet d’Or, only a special prize from the jury, although their ascent is “a monument of commitment” in the words of several high-level mountaineers. We’ll come back to this questionable choice, which the jury has accepted, on Alpine Mag. We also wonder why some brilliant climbs like the north face of Chamlang by B.Védrines and Ch.Dubouloz are not included in this year’s prize list, even though their route is claimed to be more difficult than that of the Czechs on the same face in 2019 who received a Piolet d’Or in 2020.

Regardless of each other’s choices, the presence of Ukrainians and Georgians on the stage of the Piolets d’Or means that the mountaineering elite is united. Just as a rope party stands together in the face of the distress of a neighboring rope party.