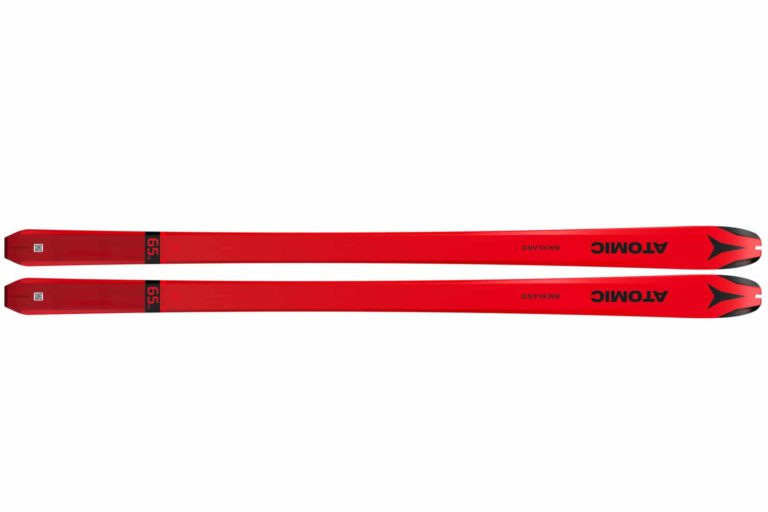 Of the three pairs of skis tested in ski mountaineering racing, Dynafit Mezzalama, Kästle TX65 World Cup, the Atomic Backland 65 UL is the most successful ski. Too bad, we weren’t able to ski the Dynastar Pierra Menta.

We can say that we prefer the Atomic Backland 65 UL because in terms of skiability, it is the least bad ski! Jokes aside, we know that with skis weighing under 700 grams, downhill behavior is a concept that is sometimes vague. On the other hand, the climbing efficiency, for this kind of featherweight ski, is surprising.

This Atomic Backland 65 UL’s tip is feistier than the Kästle TX65 World Cup’s, which sways, because it has a more shaped edge. On the Backland, the tip moves much less, the torsional rigidity is worked to precision. If you load the front, and have refined balance, you can get a correct curve for a competition ski whose program is to swallow the vertical descent without much attention to detail. On the other hand, unlike the two other pairs mentioned at the beginning of this test, with the Atomic Backland 65 UL we don’t wonder what will happen in the downhill, if the ski will crossover, or slip.

The Atomic stays in its line, in a relatively good attitude for a competitor with strong thighs. It actually requires less energy output than the other models to be controlled, and you have a higher efficiency.

Skidding turns are super easy to do and maintain. The tip always moves a little, which is inherent in this type of super-light ski. The grip is good, it’s not super powerful, but it works. On steep slopes, you get by, but this ski isn’t a benchmark. The tail is well balanced, it isn’t too rigid or too soft. You can get your balance back if you make a mistake.

Generally, the Atomic Backland 65 UL doesn’t vibrate much, it just stays underfoot and isn’t fickle. It has an excellent glide. Its price is pretty good compared to the competition.