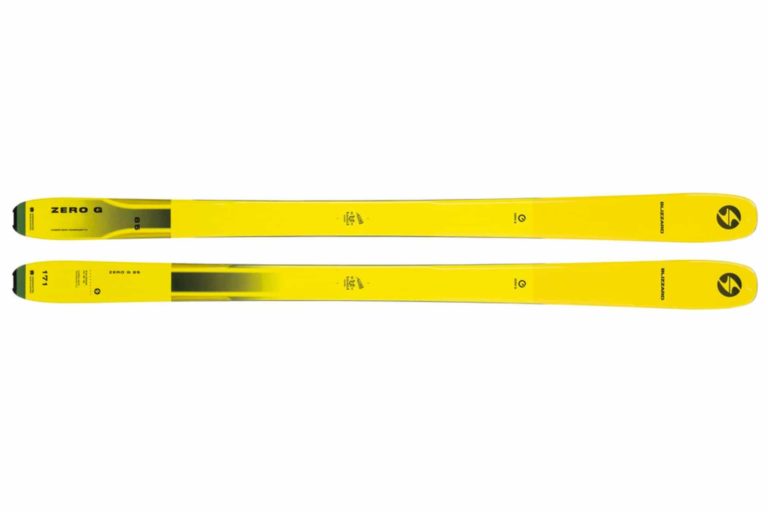 With the Blizzard Zero G 85, you are closer to a traditional ski touring ski that is efficient in the climb, stable on the edge and in steep slopes. We really liked its main characteristic, which is its stability. When crossing slopes and riding through chop, this Blizzard Zero G 85 behaves exactly how you would expect a real mountain ski to behave.

It also has a very interesting capacity to absorb. The limit before the ski skids is plenty despite having very little rocker, it has an elongated tip with a shallow lift but it’s not a problem. This tip doesn’t prevent you skiing flat and in powder, the Blizzard Zero G 85 really can lift out of deep powder. It’s comfy in all types of snow and terrain, meaning you don’t always have to be on the lookout, always concentrating on steering. The skidding doesn’t necessarily mean you are off balance at the rear. Accidentally losing your balance due to your backpack or even leaning forward won’t make the tip dip into the snow. So, the ski’s fluidity along the entire length of the edge, its ability to absorb the terrain’s relief and control them without your legs suffering is excellent.

We could ski fast with the Blizzard Zero G 85 immediately, without needing any adaptation time, and on any type of terrain.

The only downside to this Blizzard Zero G 85 is it isn’t very playful, it’s main skill: neutrality. There’s no excessive style: “I’ll try and loop, or oversteer, or climb fast”, or “I’ll let the ski take off, or open the turn and the ski does what it wants”. No, the Blizzard Zero G 85 is pretty neutral, which is ideal for what we expect in ski touring, in keeping with its turn radius. Its ability to change from skidding to carving is very interesting.

Even if we ask it to do tighter turns (steep slopes, forest skiing), the Blizzard Zero G 85 requires a little more physical presence yet isn’t too demanding.

The design, especially the colour yellow used, is very safety conscious and makes finding the skis easier in the snow.

The Blizzard Zero G 85’s design is very classic and yet with a little more weight that gives security underfoot. What you see is what you get, ok it may not have a playful character and is less lively than other models we’ve tested during this session. But we really liked this Blizzard as it has a very good glide and overall is a very good ski-touring product. It’s better to take a slightly longer size than usual despite its fluidity, the tip behaves very regularly. If you take it too short you have less control to make it skid and ski fast: so, you shouldn’t take a model that’s too short or be too heavy.