“Many friends have lost their home” says Ukrainian climber 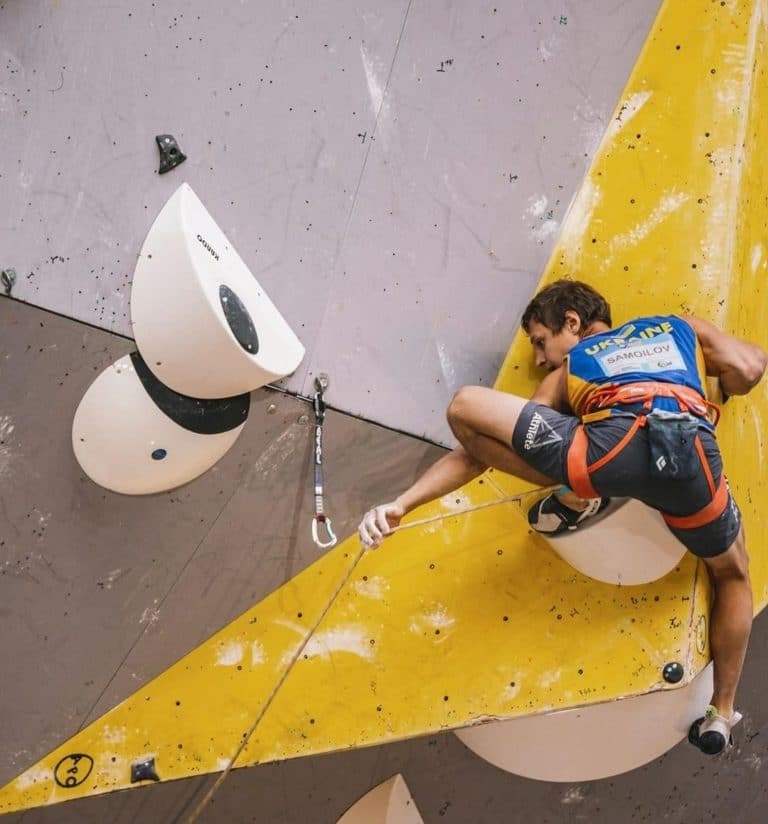 Fedir Samoilov is a professional climber. He finished 6th in the World Cup in Briançon in 2021. He is 24 years old and is Ukrainian. Currently, as a refugee in Germany, he is doing what he can to fight the war in Ukraine. We were able to exchange a few words with him.

How do you deal with the current situation ?

Fedir Samoilov :  I was in Germany when it all started. Friends from all over the world wrote to me and asked how I was doing. Many people told me that they could help me by hosting me. So I decided that it would be a good idea to make a list of people who could help those who really need it.
Currently, I’m in a safe place at my friend’s place in Munich, so I’m totally fine. But many friends have lost their homes because of the bombing and want to leave Ukraine. And few people have friends who can host them. So if someone says to me, for example, “I have two places in my flat and I can take in some people“, I can help.
There are quite a few professional climbers who are trying to leave Ukraine. And I also know climbers who can eventually host and help Ukrainians. Some of them can drive, pick up people, food, things like that.
I even had contact with a great woman from Switzerland. She is a climber and she was collecting a lot of things in her town for the Ukrainians. Sleeping bags, mats for example. I was also in contact with a guy who drives from Europe to Ukraine, so I contacted him and now things are now in Ukraine or at the borders.

What do you think about all this help?

Fedir Samoilov: Actually, I am amazed by how many people in Europe, and not only in Europe, want to help. How friendly they are. Even guys from Canada write to me and want to help – it’s incredible!
It’s a huge community, Europe. With a lot of nice people who just want to help somebody. But some of them don’t really know how to help, so I act as a contact between people who need help and people who want to help. This is what I do now.

I have a big list of people who can host Ukrainians who need help. If other people want to help, they just contact me on Instagram and I can add their names and contacts to the list. Help for civilians can also be different from hosting. On my Instagram profile there are several links to support them.

This situation is not good for anyone.

What do you think about the official decision to ban Russian and Belarusian athletes from participating in competitions ?

Fedir Samoilov :  One can have different opinions about this, but the world should definitely do something to prevent this. Some people in Russia do not understand what their country is doing. They only understand it when they lose something. If people die in Ukraine and they themselves feel good, it doesn’t matter to them. And they don’t care. But if they lose everything and they can’t fly away anywhere in the world, they start to understand.
I have a lot of friends in Russia, really nice people who don’t deserve this… But, I don’t know, they voted for this f….. president! This situation is not good for anyone. And in Belarus, thousands and thousands of people protested against their president, nobody likes him there. And it is not the Belarusians who are coming to Ukraine now, it is only their government. In Belarus, a lot less people are against Ukraine.
I post quite a lot on Instagram about everything that’s happening in Ukraine. I don’t understand people from Russia. They write that it’s wrong, fake, or they think that Ukrainians deserve it.