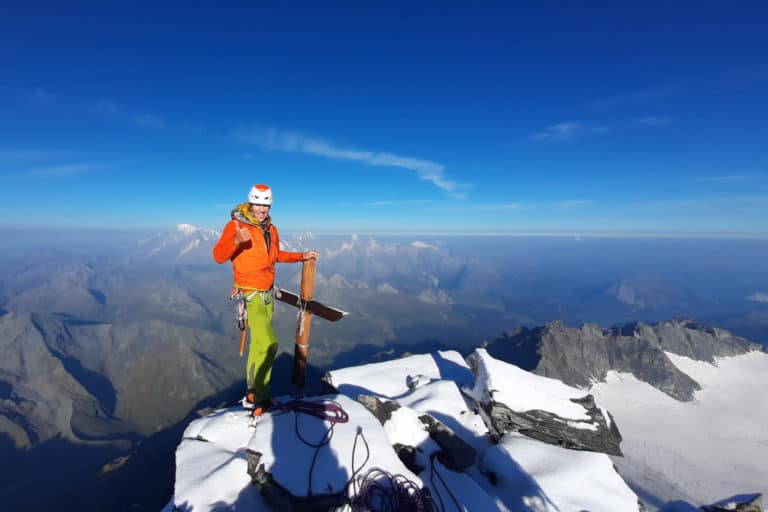 From 27 May to 12 August this year, Dutch mountain guide Roeland van Oss climbed all 82 of the 4000 m summits in the Alps in 78 days, using his own physical and moral power. If this success without motorised means allows him to join three previous climbers (Diego Giovannini and Franco Nicolini, 60 days in 2008, Ueli Steck, 62 days in 2015), the Dutchman insists that he wanted to play the role of an influencer for the preservation of the planet. Story.

As a mountain guide, climbing 4000m peaks is a big part of my work, and my life. The 4000m mark in the Alps has always been a special one. There are 82 ‘official’ 4000m peaks in the Alps, combined on a list which was created years ago by the UIAA (International Climbing and Mountaineering Federation). Climbing all these peaks, in one push or year, has been done over many years and in many forms, but only 3 climbers – Diego Giovannini and Franco Nicolini, and Ueli Steck – did all the 82 on their own power, in one push.

For me the idea started in 2018, while climbing the Arbengrat on the Obergabelhorn (4063m), together with a client. We were talking about my projects (K2, Moonflower, Cassin ridge, Cholatse, Manaslu) and about my feeling towards them. I already climbed some 4000m peaks solo (royal traverse on the Mont Blanc, 15 hours), and these climbs felt like my favourite alpine outings. Not because of the difficulty,