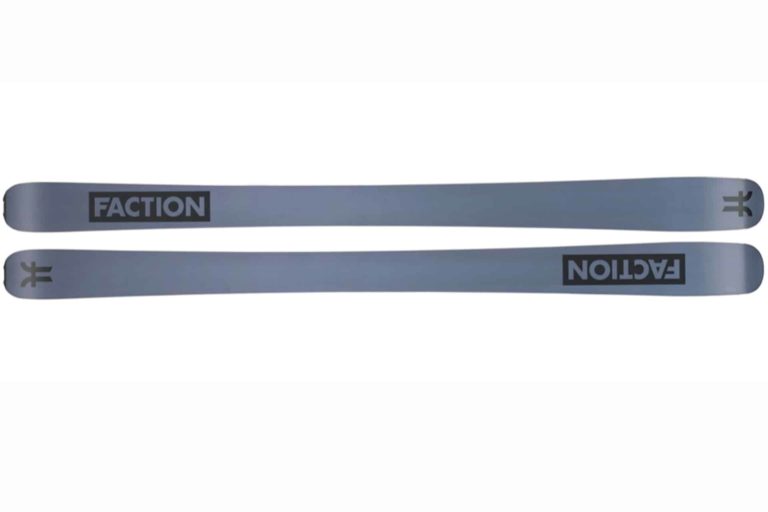 An all-gray ski, that we can’t decide if it is ultra-classic or very refined. The perceived quality is ok, it’s not superbly made, however, there is a beautiful die cut on the sole.

Once riding the Faction Agent 2.0, you can feel the Faction DNA. It’s a ski for younger skiers who can ride in a raised stance, weight on the heel and subsequently the ski works well. There is a pronounced rocker at the front, with a tip lift that makes pivoting easy. It is very pleasant in difficult snow. The Faction Agent 2.0’s oversteering works in its favor. A skier who maintains the glide on the edge by being angled will be taken by surprise. On the other hand, those who have a lightweight build, or who want assistance in complicated snows will like this almost immediate pivot. So, keep in mind that if you rush it, the Faction Agent 2.0 will turn in the blink of an eye.

Heavier or technical skiers who are lean forwards on the tip will discover it’s not very present and loses grip easily. You must therefore pilot from a rear position. This tip does vibrate a bit. It doesn’t chatter on hard snow. The grip is correct, it is not super powerful, but it remains within the standard for this type of product. Heavy guys who move at high speed will quickly find its limits.

From a freeride ski touring perspective, this Faction Agent 2.0 is really interesting because it is both light (1660g/ski in size 179 cm) and quite wide at the waist: 96 mm. It lifts out of the snow fairly quickly; in all snow and terrain it is at ease as long as you don’t ski it too hard. Its width is substantial and so we expected a little more performance but the tail sinks a little under the snow, so this limits efficiency, but overall there’s buoyancy.

The Faction Agent 2.0 is a pleasant, easy ski for the freerider. It is brilliant in the forest, on bumpy slopes, in packs of snow that push the skis up under your feet. Another big advantage of this Faction Agent 2.0 is its ability to absorb all vibrations. So, it’s comfortable thanks to this filtration which saves energy and you don’t get tired.

When carving, the Faction Agent 2.0 gets on the edge very easily helped by its oversteering. You almost have the impression that you are riding on a very carving ski even if you’re not. The front of the ski is very flexible, and this Faction Agent 2.0 turns easily.

On soft snow you find the edge easily, you just need a bit of angle. The Faction Agent 2.0 rides and changes the radius according to the skier’s desires: you can lengthen or reduce them without any difficulty. We meet the same limits linked to the ski’s front flexibility: a powerful skier loses stability. So, when carving, it works on all types of radius but only at moderate speed, then it’s really enjoyable. On very hard snow you really need to carefully regulate the angles: too much angle then the ski stalls.

On the climbs it fulfills its mission well due to its light weight. Crossing frozen slopes, with its reduced edge length and front flexibility you need to concentrate to produce a 100% solid grip. We liked the tip’s lack of inertia and its good weight distribution.

A very good skier would want more “oomph” and less oversteering. But, this Faction Agent 2.0 is a good ski for less physical skiers who are less at ease in chop and with less technical experience.