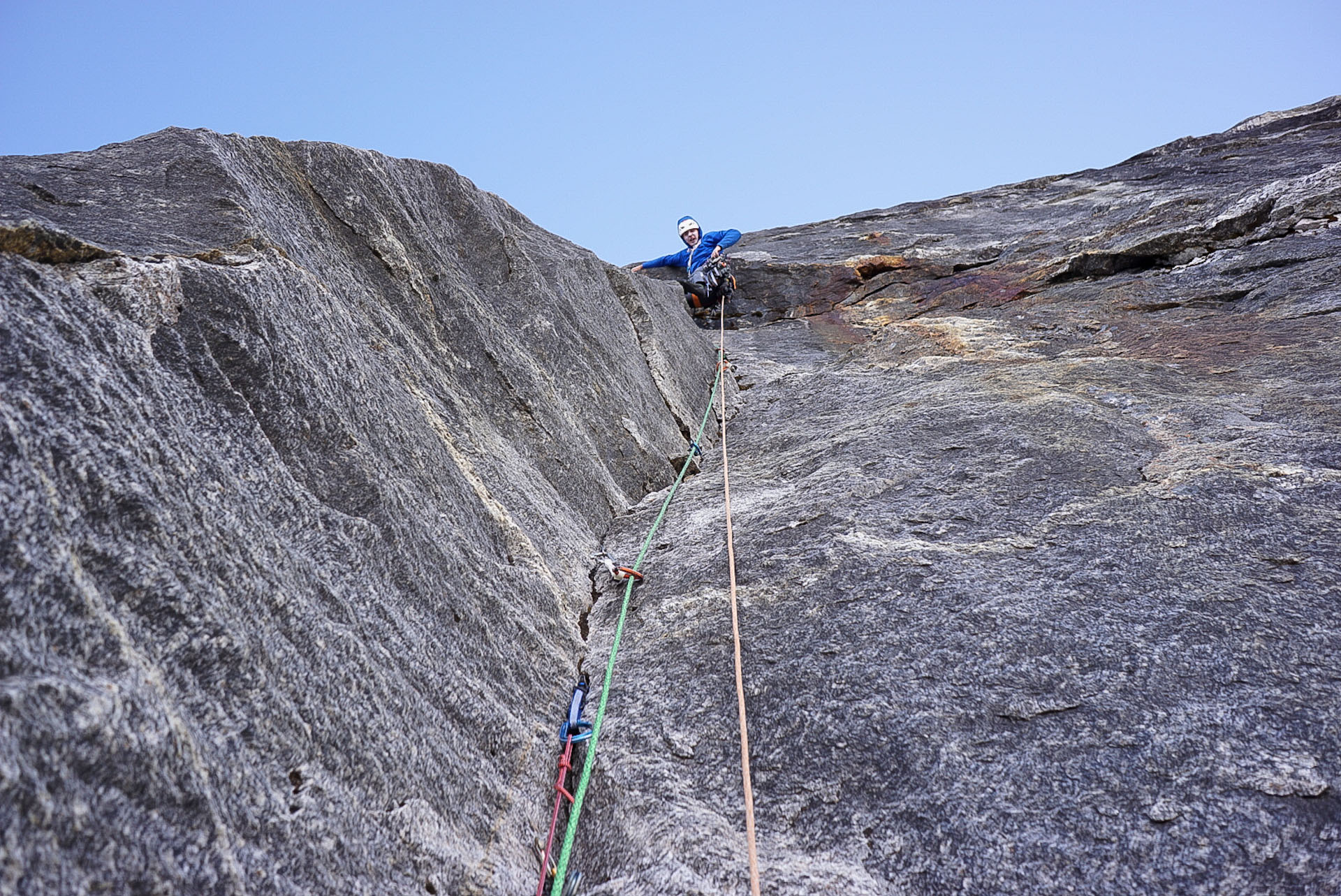 Travelling to Nepal’s Thengbo Valley last autumn, Tom Livingstone and Matt Glenn finally made the coveted first ascent in 20 years of the North Pillar of Tengkangpoche (6487m). But the two young British climbers took their time, on the spot, to choose this precise objective and to carry out… a first attempt. Second part of Tom Livingstone’s story.

Our tea house was a mud-lined building which squatted into the hillside of the Thengbo valley. Low clouds scudded over juniper bushes which were slowly browning with autumn. A stream burbled beneath the building and outhouse, past some excellent bouldering. If it weren’t for the yaks grazing nearby and the occasional glimpse of snow-covered summits high above, it could’ve been the Scottish Highlands. This sense of familiarity, of home, relaxed me… only for the distant summits to emerge from the clouds, reigniting my nerves.

Matt and I stooped through the door and blinked in the darkness, greeted by Tsongee Sherpa and her wide smile. A stove smoked yak shit and we sipped sweet masala tea. This would be our home and base camp for the next month. « This’ll do nicely! » we agreed.

We were still adjusting to the friendliness of Sherku Sherpa, our obligatory trekking guide. I explained that we were all friends and so he could relax. Sherku nodded and said he understood, but still arranged the condiments around us as close as possible at every mealtime, and offered « tea, coffee, whatever you want, » whenever we looked up. 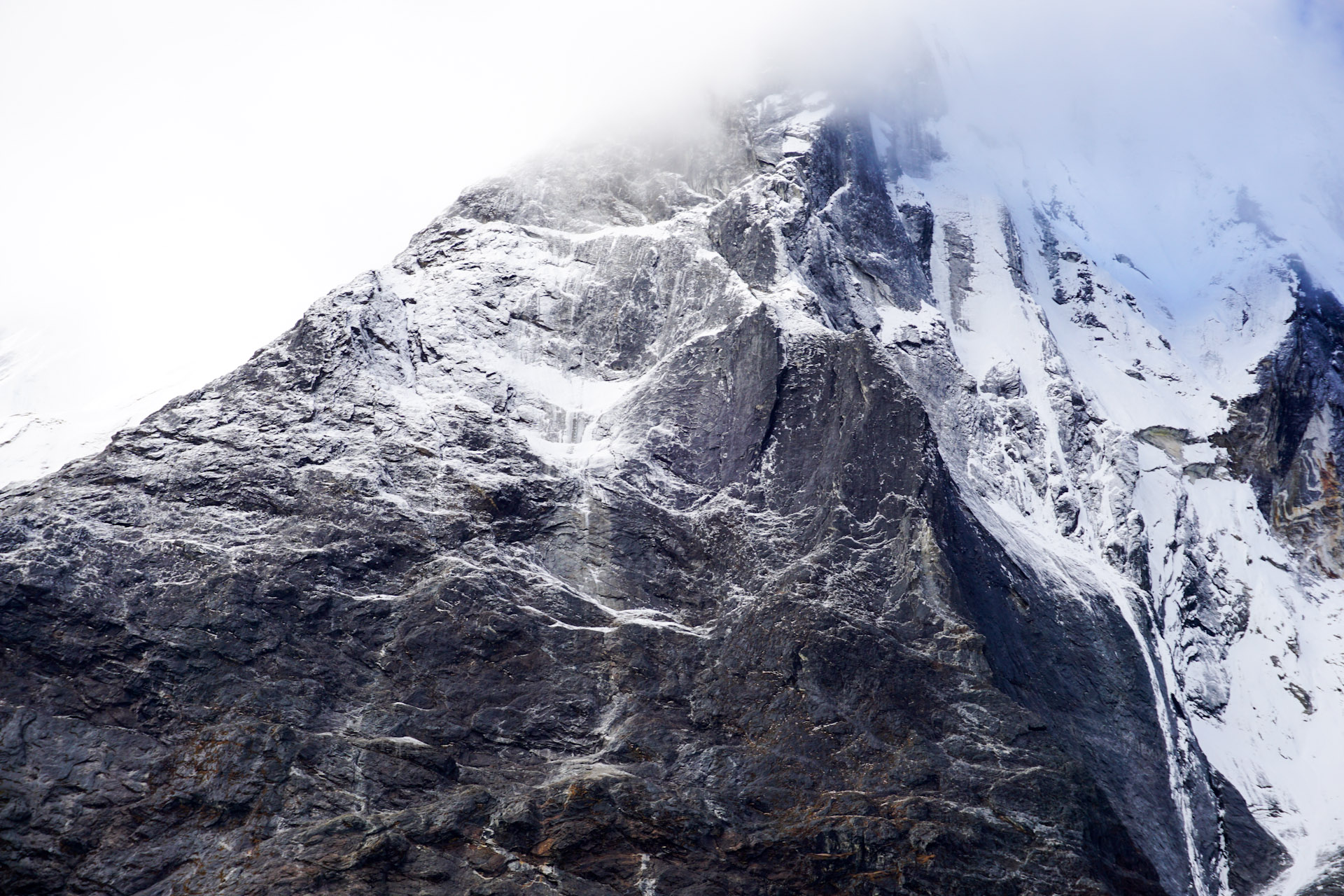 Matt and I watched a giant fridge-freezer hover past us, two spindly legs staggering beneath it. We were dumbfounded.

The last three days were spent hiking to our tea house. Further into the mountains, past the precarious airstrip at Lukla (where I imagine the pilot has to think « let’s just give this a shot and try to land here »), everything has to be carried uphill on the backs of men and women. Sherpas use a wide strap over the foreheads to carry enormous loads. Matt and I sat by the trail and watched a giant fridge-freezer hover past us, two spindly legs staggering beneath it. We were dumbfounded.

« Machines! I said. It’s unbelievable, they’re so impressive. Imagine an entire village being carried into place. »
– How much would you have to be paid to do that? Matt asked.
– I think a fridge-freezer would flatten me, money or not! I replied.

We could only stare in disbelief as the incredibly heavy (bundles of rebar) and incredibly unusual (flatscreen televisions) zig-zagged slowly into the hills.

I was also impressed at how many local people had climbed Everest – and how often! « I’ve climbed to the summit six times, » one young shop owner in Namche Bazar told us.
« And I’ve climbed it twelve, » another said happily. They chuckled as they spoke of dragging their clients along, or at the risks involved. « Much danger! » one of them said, then laughed as if it was a bonus.

« How much would you have to be paid?! » Matt asked again.
– I’m glad I’m not going towards Everest right now, money or not! I replied.

Just before we left WiFi in Thame village, Quentin messaged me saying he was rather upset that we might try Tengkangpoche. He’d seen a post by our agent with the caption ‘Tengkangpoche Expd.’ I explained that we had put that mountain on our permit because it was easiest and cheapest, and it was just one of the many options we had in mind (including the mountain’s north face, rather than the pillar). I also said we didn’t want to ‘steal’ his mountain and I respected that he had put a lot of effort into it. Since I had no idea if we’d actually climb anything, I suggested it was better to talk again at the end of our trip. In the meantime, our decision-making would be influenced by conditions and motivation: the priority is always to come back safe and have fun.

Scoping out the surrounding peaks

The quietness and isolation of Thengbo allowed us to focus. We switched off our phones – an act I really enjoy during my trips – and began to feel the rhythm of the mountains.

Matt and I scoped out the surrounding peaks. Down valley, Kwande looked like a fortress: a bulk of rock and ice. Kongde Ri looked incredible, like a « double Grandes Jorasses. » Tengi Ragu Tau towered at the head of the cirque. And straight in front of us, Tengkangpoche soared. It reminded me of Les Drus in Chamonix – a peak ready to blast off, a pointed spire which almost ripped the fabric of the sky. 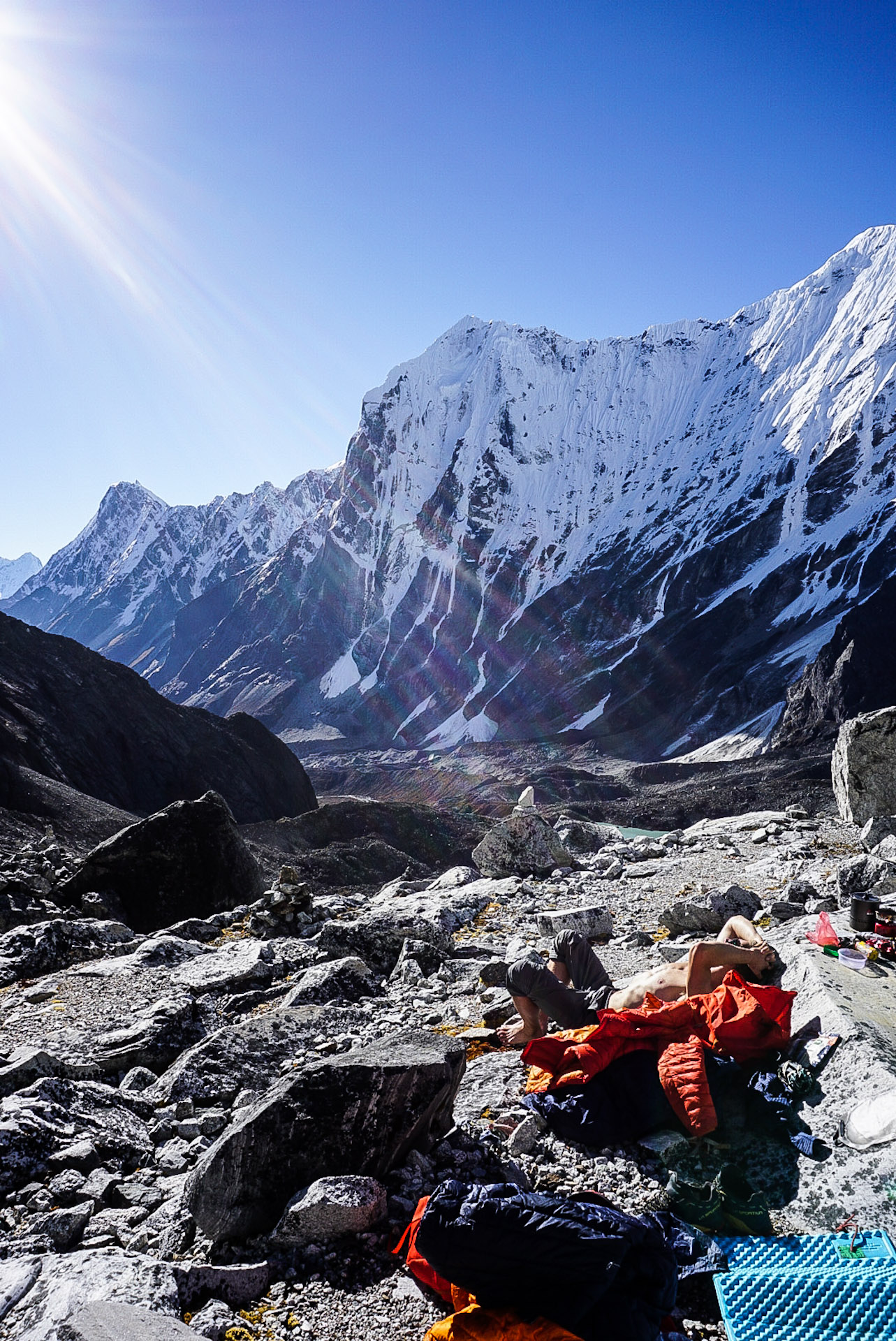 Time to choose and acclimatise ©Livingstone/Glenn

our minds not yet dare to believe

We stood outside our tea house in the cool of the morning, coffees in hand. « Angel » by Massive Attack thundered through the speaker, a dark and brewing song which built into a screaming electric guitar, like a storm of energy.

« Belter, » Matt commented.
– Monster, I replied. Our fingers traced imaginary lines up the mountains, but we left them hanging in the air, floating with our unfinished sentences.
– If you go up through that ramp system, maybe you can follow a thin couloir to the left…?

Eventually we drifted back to earth, our eyes and minds not yet ready to be amongst the summits, not yet daring to believe. Instead, shouldering packs, we trudged higher up the valley to acclimatise for a few days.

With the necessity of growing red blood cells finished, we returned to Thame village for WiFi and hot showers. (I’m used to a remote base camp without luxuries, whereas this Nepalese-style trip was a treat!). A weather window appeared on our forecasts; Tengkangpoche’s north-east pillar seemed to be the most suitable objective. Of all the available peaks, it was in the best condition, with dry rock and little snow; it also looked like the most impressive, obvious and attractive thing we could see.

with everything inside, our packs weighed about 17 kilos each

Our minds were slightly intimidated by the route, since Quentin and Juho had found a lot of hard free and aid climbing in 2019. We were also slightly hesitant since Quentin had tried twice before and invested a lot of effort, but reasoned we’d « have a look, » with low expectations. We packed our bags with quiet apprehension, paring down gear as much as possible. I was curious as to what we might find, hoping we could free climb much of the route in order to save time.

At first light the following day, we reached the base of the pillar. Sherku had kindly carried a bag of gear up the grassy slopes too; with everything inside, our packs weighed about 17 kilos (!) each. I worried we had too much junk, but reasoned that big routes need big bags.

We scrambled up easy slabs and grass until steeper ground called for the rope. It was strangely reminiscent of Idwal Slabs in north Wales, and Matt began questing upwards. Our double boots clunked loudly against the compact granite. « Shit! » Matt suddenly shouted, stretched out on smooth ripples of stone. He began falling, first skidding then tumbling down the slabs. Thankfully he was stopped by his last piece of gear, a « not great » peg.

« Sorry man, » he said as he dusted himself off.
– You rocket! I teased when I saw he was fine. 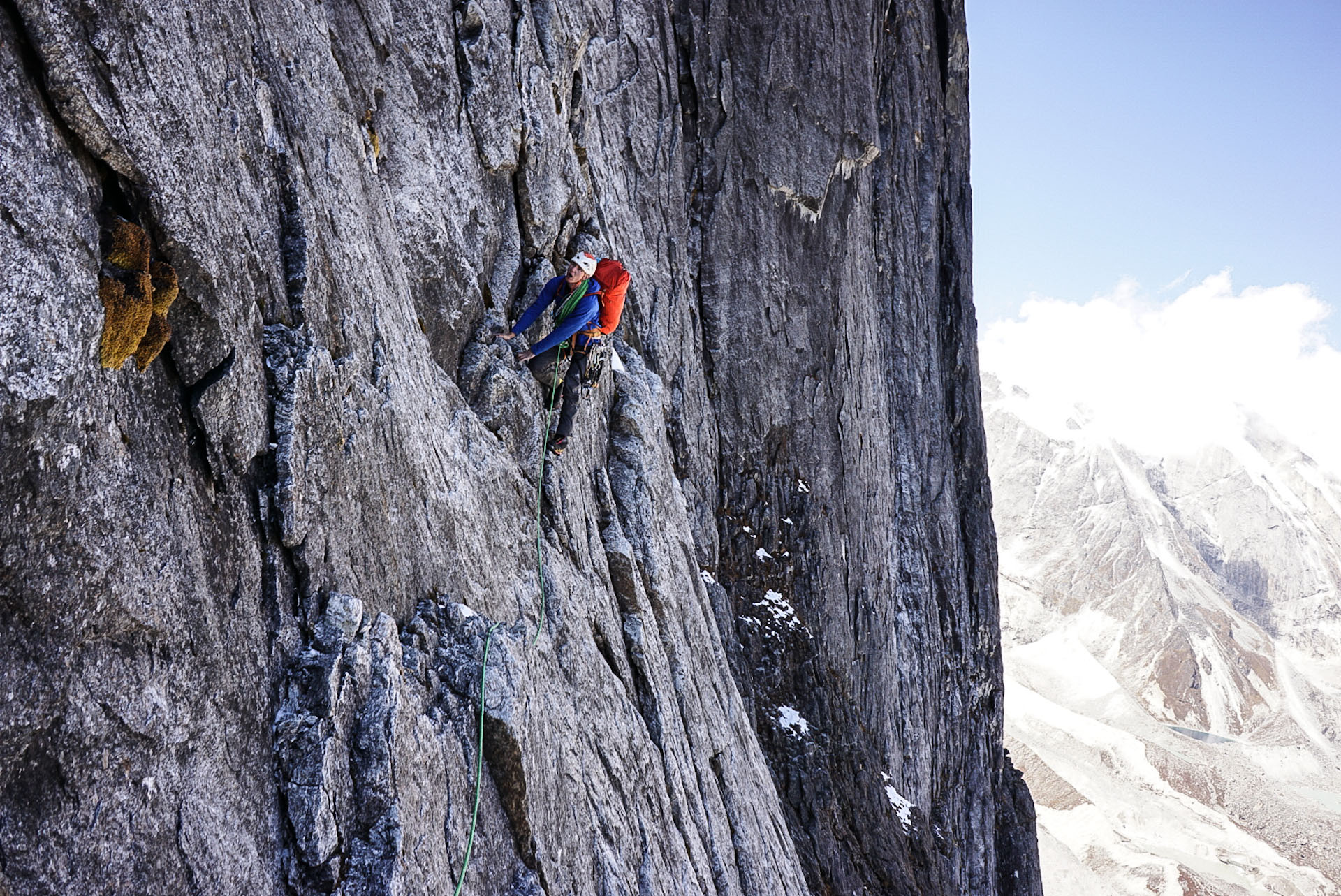 one long mixed pitch had me hot and pumped

We moved together along ledge systems and zig-zagged up the face, the terrain growing steeper and the walls beginning to tower. Transitioning to crampons and axes, we raced up snow and ice through a feature we’d nicknamed « the smiles »; we could see two upward arcs of snow from base camp.

Around noon, we reached a snow terrace where previous teams had bivied. « We can’t stop here… it’s only 12! » Matt and I agreed. I’m all for taking it slow and stopping early on these Himalayan marathons, but sleeping there seemed counter-productive. We shrugged on our giant red backpacks again and zagged back left. Just before the next snow terrace, one long mixed pitch had me hot and pumped, cursing the strangely compact-yet-loose granite. I left my backpack on a piece of gear about 15 metres from the anchor, so Matt had to second the pitch whilst dragging it. « You rocket, » he replied, and we smiled. 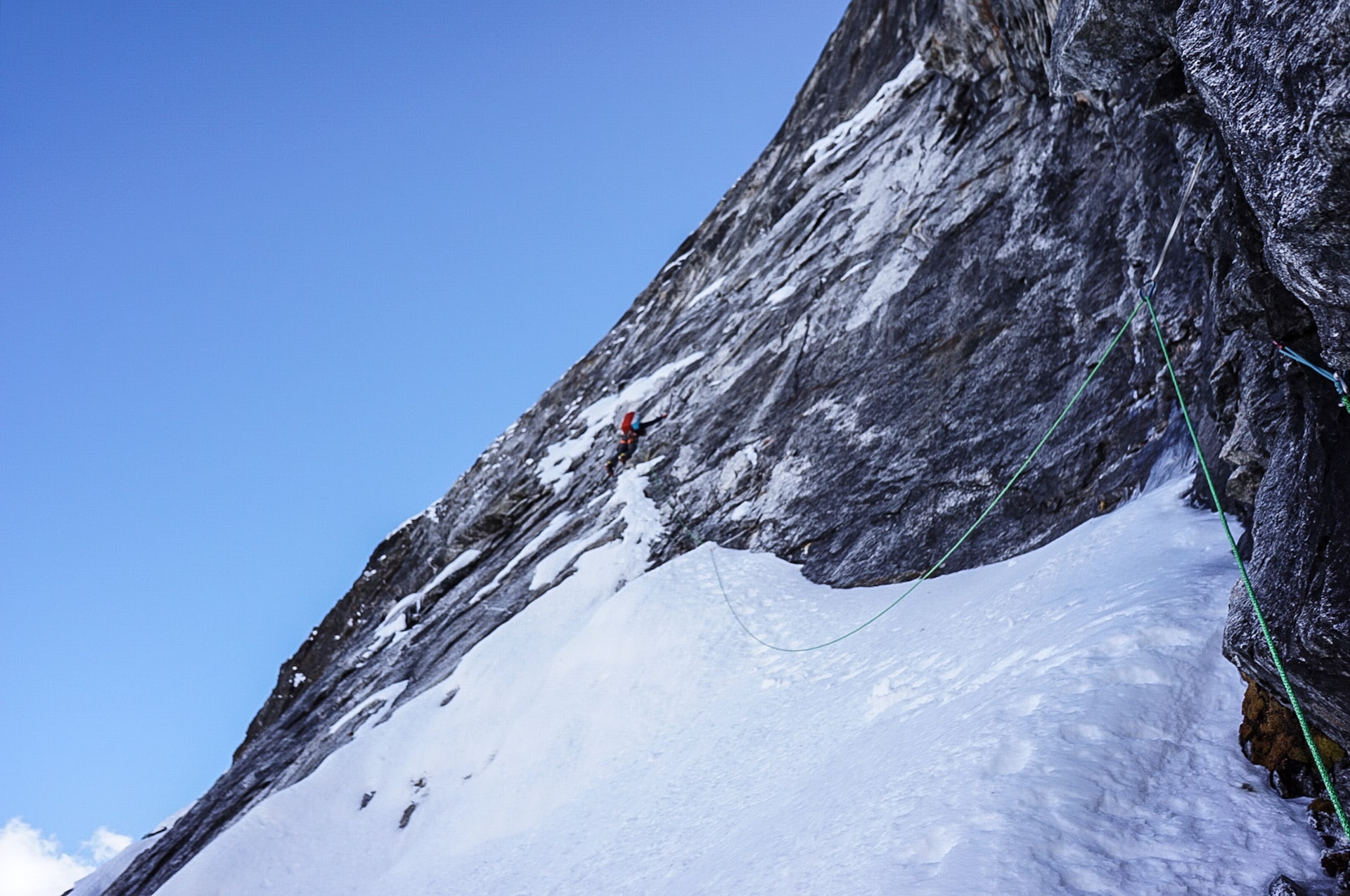 Attempt 1. Day 1. The crux pitch before the first bivy ©Livingstone/Glenn

« I guess that’s Everest! » I said, pointing to the highest peak.
– No shit, Matt agreed. It looks strangely close… funny to see it in reality, and to think it’s made of snow and rock, just like everything else.

We also saw Quentin’s backpack stashed at the bivy from his attempt in the spring, sympathising for him and Jesse; they’d put in a good effort but had bad luck with the weather. We looked inside then left it alone. Diving into the tent, we tried not to think about the 300-meter headwall looming above.

The next day we aimed to fix our single and tagline ropes up the lower headwall, giving us the best chance of making it to the next snow terrace on day three. After an hour of glorious sunshine, we launched onto the wall and into fridge-like temperatures again. « It looks like the Dawn Wall, » I thought ominously. 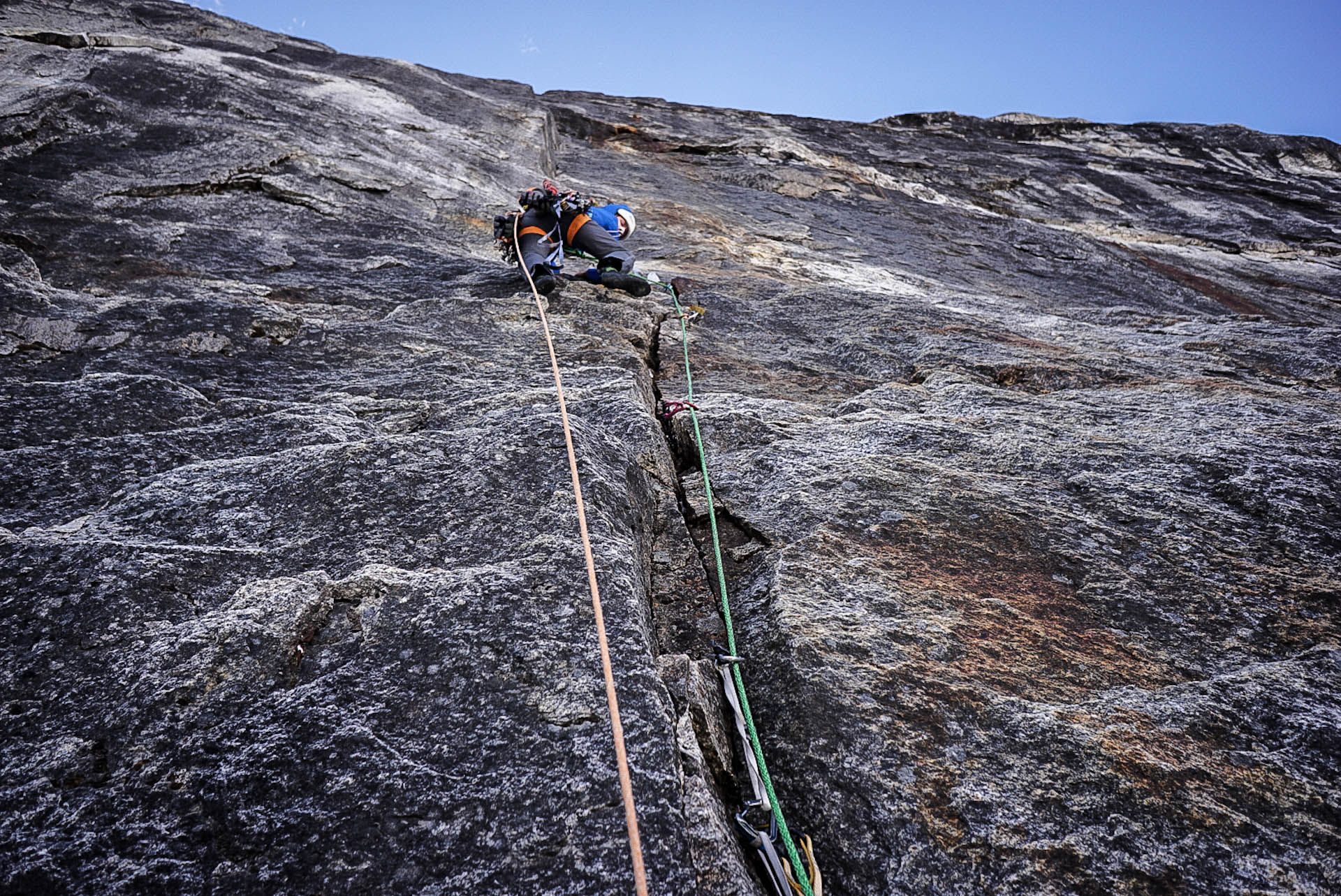 There was a deep cut, blood dripping out 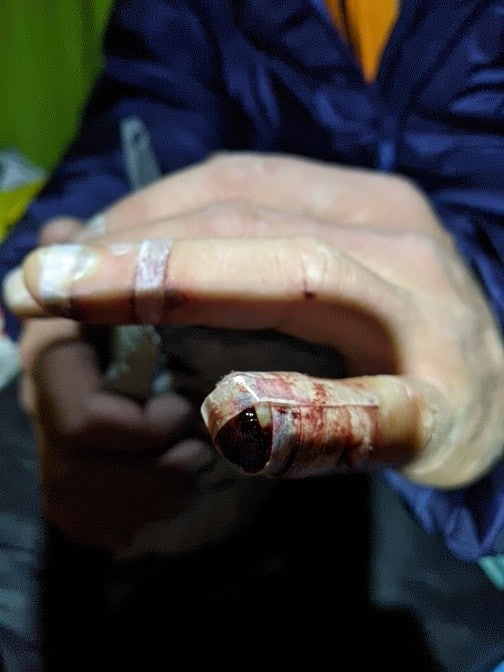 I started aid climbing up sporadic crack systems, my limited experience and patches of ice making things slow. On the second pitch, after about 20 metres, I saw an in situ copperhead and gingerly weighted it. Using my axe to pull up, I suddenly felt a crunch. The axe ripped out, I slumped onto the copperhead and – effortlessly – it pulled out of the placement. I was caught by a good cam some way down the wall, but scraped my little finger on the rock in the process. There was a deep cut and I wiggled the nail around, blood dripping out.

Bandaging it at the bivy, we were quiet. « You rocket! » Matt said. « Let’s keep climbing for now » we agreed, jumaring back to my pitiful « highpoint ». I couldn’t believe I’d fallen off and scraped my little finger – of all things! Matt led three more pitches until, late in the afternoon, we had the inevitable conversation.

« What do you think? » Matt asked.
– I can only jumar with a giant mitt, and it hurts but it’s ok. Sorry mate. Shit. Maybe we could keep going? I guess it really needs a doctor.
– I think it needs medical attention. You don’t want it to get infected and we have about five more days to go.
– Mmmm. I think you’re right… Double shit!

We rapped down to our bivy, pulling the ropes. The following day we descended, taking all our gear with us. We reached Thengbo in the afternoon, then walked to Thame in search of a doctor.